Skip to main content
Posted by Kristina Killgrove May 16, 2007 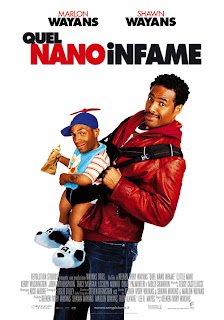 I was laying out some bones at the lab today, and I started reading the newspaper that I use to make it easier to clean the table. It was a few months old and had this ad for a movie. In English, the movie was called Little Man, a 2006 Wayans brothers vehicle that involved one of them "adopting" a fugitive midget as his son. I'm sure it was hilarious. What amused me greatly, though, was the title as translated into Italian. Quel Nano Infame basically means "That wicked dwarf." The English version, Little Man, makes a pun on the size of the character and his role as a son, and is also politically correct. The Italian version, of course, comes right out and says this movie is about a freaky dwarf, man. Apparently the Romans have not come far from their early literary background. I was reminded of a Catullus poem that goes:

That's for those of you Latin geeks out there (you know who you are!). For all sane people, Catullus says, "I laughed at someone in court lately who, when my Calvus gave a splendid account of all Vatinius' crimes, with hands raised in surprise announced, 'Great Gods, an eloquent midget!'"