Three Girls, a Dead Raccoon, and My Crockpot: A Photo-Essay

I was out of town giving a public talk last week when I got this picture along with a text from my husband: "Zooarch consult plz." 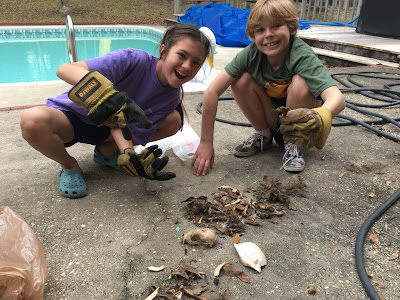 That's my 8-year-old, Cecilia, on the right along with her BFF. They were traipsing through the small patch of woods behind our house and found some... dead stuff. Squinting at my phone, I typed back that there was a turtle and maybe a small dog or something, but that I'd check it out when I got home. And to wash their hands well.

The girls gathered the bones-and-fur mess and tied it off in a plastic bag. 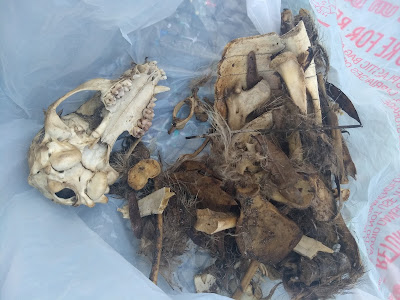 Once I got a look at it, and posted to Facebook for a consult, I realized it wasn't a dog but rather a raccoon. The next step was to separate the raccoon from the turtle shell and pick off the gross decaying fur. So I brought home some nitrile gloves from my lab. 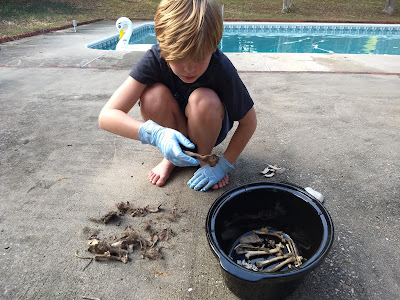 Cecilia liked this part, and was excited to find some vertebrae still articulated: 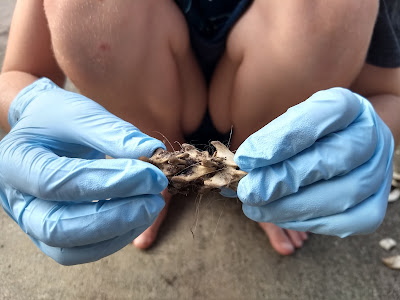 She put all the bones into the crockpot that I brought home from my lab as well (which we keep for the express purpose of defleshing stuff that, well, still has squishy/hairy bits on it): 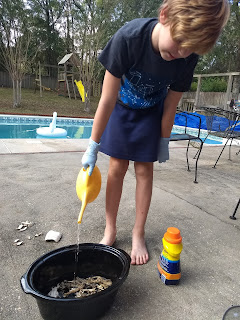 She filled it about 2/3rds of the way up with water from the garden hose (which she wanted to put in the watering can for some reason). Then, we had to add detergent. Biz was recommended to me by our resident faunal expert in the department, so I bought a small amount of it at Publix. 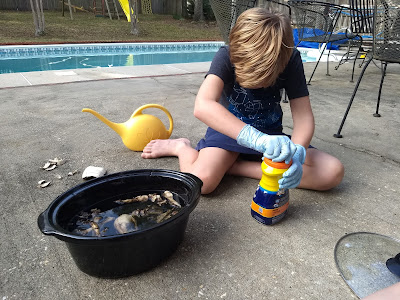 At this point, my 4-year-old, Linnea, wanted to help out. After Cecilia dumped in the detergent, she and Linnea took turns gently stirring it. (Linnea, by the way, was quite disappointed in the raccoon - she really wanted to macerate a bat, to see how its wing looked on the inside. But that's not gonna happen because of the risk of rabies.) 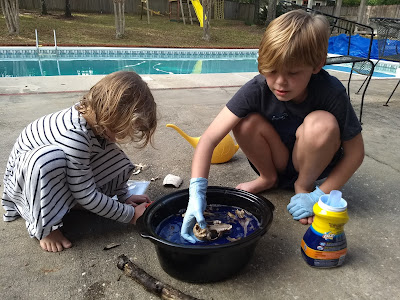 We put the lid on, turned the crockpot on to the low/4-hour setting, and left it alone. 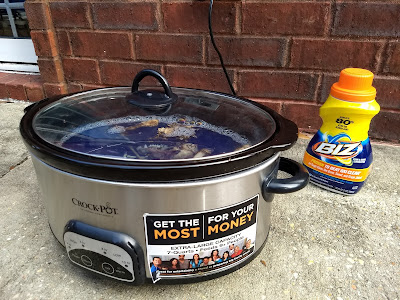 Since we didn't start this quite early enough in the day, by the time we turned the crockpot off, it was getting dark. I decanted the sudsy water off carefully, and then dumped the rest of the water-and-bones out onto the cement patio. We collected the bones and set them on the metal table outside, and I let Cecilia and her friend scrub the bones with old toothbrushes to get the remaining fur off. 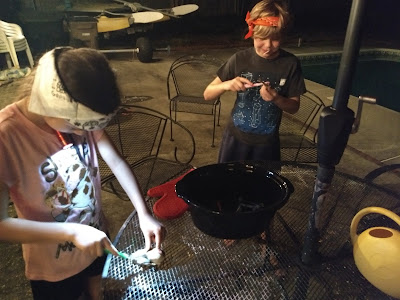 Once the bones were cleaned, I tossed them into a disposable tupperware bowl, dumped in all the hydrogen peroxide I had (maybe 1.5 cups), and topped the bowl off with water and capped it. I didn't take any pictures of this, but we left it on the kitchen counter for like 3 days, swirling it occasionally.

When we were happy with the color, we dumped the bones out of the hydrogen peroxide solution and let them dry on the table outside. 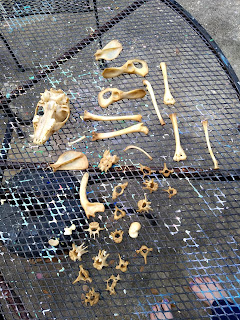 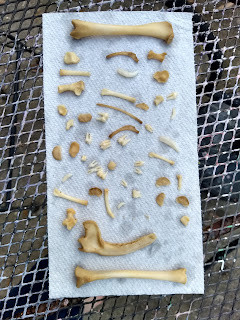 After the bones were dry, I printed out two diagrams of raccoon skeletons. I gave those to Cecilia along with the clean, dry bones, and let her puzzle out where they all went. 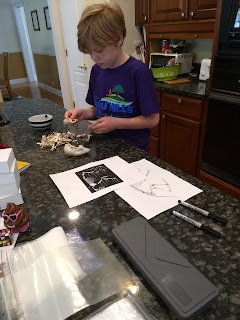 This is what we ended up with, once I helped identify and side the bones. (Those of you with better faunal anatomy skills, don't yell at me! I totally punted on the metatarsals and tarsals(?) but think I did OK on the major bones.)

Cecilia wanted to label the bones and put them in labeled boxes or bags, so I helped her by telling her the correct plurals where relevant. 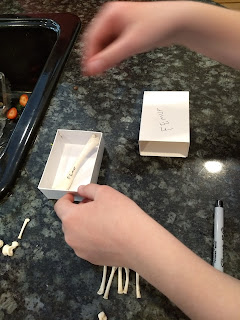 And that's it! We finished labeling the bones this afternoon, and now they're in little bags and boxes, waiting for... well, who knows. I'm interested to find out what Cecilia wants to do with her raccoon!

So, if your kid brings home a random dead thing, all you need are a crockpot, some detergent, and hydrogen peroxide, and... voilà! A STEM-worthy project.

Fracture said…
I LOVE the little drawings on the labelled boxes! That should be a requirement for museum collections, too!
03 March, 2018 20:42

Brandon Doyle said…
Cool project :) I have three sisters, and when we were younger we were always interested in things like this. It isn't everyday you get to learn about things like this; the usual responses from adults are, don't touch that! You'll get a disease or rabies! But it's really nice of you to have cultivated their interests and curiosities.
04 March, 2018 23:55

Unknown said…
While this is a cool science activity, and I don't want to be a downer, you should be aware of a danger specifically posed by raccoons - parasitic worms carried in the feces of many raccoons. If ingested, these can infect a human host, and potentially into the brain, with horrifying effects including death. Read more at: https://www.cdc.gov/parasites/baylisascaris/index.html

Stacy said…
During my first training excavation in college I found a recently-dead raccoon and, over the course of three months, recorded its decomposition. Sadly, we didn't have the equipment to macerate the skeleton as well!
08 March, 2018 04:55

Unknown said…
With yours and Patrick's careful parenting your daughters will grow to have well-nurtured senses of inquisitiveness, as well as the skills to act. They're very lucky. Hey, is that a Hobie in the background?
10 March, 2018 16:18