The Lady on the List
Episode Summary
Booth and Brennan have to rappel down a cliff (in a decidedly un-Virginia location) to check out a body hanging from a rock-climbing line.  A hawk has started tearing up the body, which has been there for days. Based on the palatine suture, the width of the ascending ramus, and the sternal rib ends, Brennan thinks this was a Caucasian male in his early 50s. Booth thinks it might have been an accident, but Brennan is not too sure.  They capture the hawk and take it back to the Jeffersonian, since it was munching on the remains.

Booth introduces Sweets to VAL - the Virtual Adumbrative Lineation computer system that supposedly does Sweets' profiling job better than he does.  Sweets, of course, takes issue with this and disagrees with VAL at pretty much every opportunity during the show.  He is vindicated at the end, and Booth and Saroyan get rid of their systems. 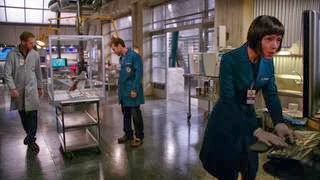 At the Jeffersonian, the team -- which includes Wells this week, whom no one likes and who mouths off to his bosses every chance he gets, begging the question of why he is still employed there -- notes lack of markers of extension along the phalanges and an absence of remodelling, meaning the victim has not been rock-climbing before. Based on decomp, time of death was three days prior. Trauma to the face suggests the victim smashed into the cliff face-first, which doesn't seem like a rock-climbing accident. Further, hemorrhagic staining around the parietal is perimortem, meaning he was bludgeoned before going over the cliff. Bilateral intercondylar injuries to the distal femora occurred four months before the victim died and seem to have no further relevance to this case.  The victim's liver shows that he had an advanced stage of cancer.  Angela reconstructs the face from the partial, smashed skull and gets one hit - Charlie McCord, a high school principal who was married with two kids.  Hodgins sets about analyzing the contents of McCord's cerumen to figure out where he was in the days before he died.

Booth brings in McCord's wife for questioning.  She hadn't seen him in four days and didn't know of anyone who wanted to hurt him.  She explains that McCord wasn't on any narcotics for his pain, just homeopathic remedies she gave him.

Angela meanwhile checks out the videos from McCord's cell phone.  He has one video in particular of McCord walking up to Chuck "The Iceman" Liddell, a mixed martial arts star, and punching him in the face. Booth brings Iceman in for questioning, but he explains that McCord called him and told him about his "bucket list," which included punching him in the face.  Iceman found this kind of charming; he didn't kill McCord.  Wells notes that one of McCord's fingers was medically treated after he punched Iceman, so he suggests Angela get his medical records.  They find that McCord didn't list his wife as his emergency contact; rather he had Martin Proctor listed.  Booth goes to question Proctor, a former baseball player whose injury sidelined him to coach, who notes he was helping McCord with his bucket list, as McCord felt his wife didn't need to know about it.  The last two things on the list were "go rock climbing" and "make Lena whole."  Lena Silver was a bookkeeper at the high school who was embezzling.  McCord turned her in, and she ended up going to jail and losing custody of her kids.  He wanted to make things right with her, though.  Silver ends up being the primary suspect, according to VAL, strengthened by circumstantial evidence that Hodgins finds: a day or two before his death, McCord was near a tire recycling facility, which was located near Silver's house.  Booth goes to question Silver, who brandishes a pipe, in violation of her parole.  The pipe is not a match for the injuries to McCord's skull, which seem to have been inflicted by both one implement and multiple implements.  But since Silver stood to inherit a bunch of money from the proceeds of McCord's online self-help videos, she remains a suspect, as does McCord's wife.

Then for some reason, the hawk starts feeling bad, and Hodgins discovers that there was arsenic in McCord's body.  The arsenic was preventing McCord's bones from remodelling properly, making his bones look like they had more advanced cancer than they really did.  Booth fingers McCord's wife for poisoning him with homeopathic remedies, but she denies this.  Brennan then notices a peculiar feature of the fracture to the skull: McCord was struck in a side-arm motion, as if by someone who couldn't rotate his arm from above.  This leads Booth to arrest Martin Proctor, the ex-baseball player-turned-coach who was helping McCord out with his videos. Although Proctor had an alibi - he was at the movies and had a ticket stub - the stub turned out to be someone else's he pilfered from the trash.  Proctor admits he asked for part of the profits from the videos he was helping with, but McCord reserved that for his wife and for Lena Silver.  Proctor wasn't trying to kill McCord, just scare him into giving him money, but when he hit him with a bag of rolls of quarters, McCord died.  Proctor staged it to look like a rock-climbing injury, since that was on McCord's bucket list.

Ratings
Forensic Mystery - C+.  Eh.  It was pretty obvious it wasn't the wife, the bookkeeper (one of my favorite words to type, though!), or the UFC champ. That left the baseball coach.

Forensic Solution - C. Ugh, all the forensic markers used to identify the body were terrible, except for the sternal rib ends.  And facial reconstruction?  Blah.

Drama - C. We all knew Sweets would be vindicated. And the B&B wedding planning is boring.  At least the writers won't drag that out, seeing as next week is the B&B wedding extravaganza!  Man, am I the only one hoping a corpse will show up in their reception food trays or something...?

Sally said…
What bothers me the most is the way Brennan is doing everything related to the wedding according to what Booth wants. She even agrees to get married in a church!! And the whole part with the wedding dress was really lame.
She's no longer this hyper rational character that the whole show was built upon.
10 November, 2013 13:26

pinkeysegun said…
thank god i found this blog, i was beginning to think am insane, so many factors have been contracting in this show for a couple of season, i turned from a big fan to a big critic, btw i thought Angela was an artist where and when did she get her minor in computing? if she was as good as she is NOW with computer computer would 've been her passion and not the artist/lesbian artist conundrum in d previous season. Now she knows all bone details and parts when she makes her bogus construction. Anthropologicall computer artist/genius.
why wasn't hodgins wealth disaapearance investigated?
09 February, 2014 14:58

pinkeysegun said…
thank god i found this blog, i was beginning to think am insane, so many factors have been contracting in this show for a couple of season, i turned from a big fan to a big critic, btw i thought Angela was an artist where and when did she get her minor in computing? if she was as good as she is NOW with computer computer would 've been her passion and not the artist/lesbian artist conundrum in d previous season. Now she knows all bone details and parts when she makes her bogus construction. Anthropologicall computer artist/genius.
why wasn't hodgins wealth disaapearance investigated?
09 February, 2014 14:59

Unknown said…
I haven't heard too many mistakes with the information they use, but working with Hawks I know the the parts they regurgitate are not called a rangle. Hawks like owls regurgitate what's called a pellet or a casting. Rangle are the different objects they swallow, whether they are natural or not, to help their body make these pellets and regurgitate them. Rangle would be bones, fur, stones, cloth; things they swallow with the food they can digest.
11 July, 2016 11:02