The Pathos in the Pathogens
Episode Summary
The Jeffersonian takes on a case at the request of the Centers for Disease Control and Prevention (CDC).  A body was found mingled with veterinary waste.  An infection such as necrotizing fasciitis was first suspected, but the changes to the remains and the state of decomp suggest an unknown pathogen that is highly virulent and is replicating quickly.  Dr. Ivan Jacobs of the CDC can't figure out what the disease is, so the remains are brought to the Jeffersonian so they can identify the victim and hopefully lead the CDC and FBI to the source and the cure.

Based on the (small size of the protuberance on the) occipital bone and the shape of the pelvic outlet, Vaziri concludes the victim was female.  Brennan estimates based on mandibular dental wear that she was 25 to 35 years old when she was killed.  The lesions on her long bones and ribs developed within the last 24 hours, and her soft tissue is turning to soup.  Jacobs thinks they are dealing with a single-strain RNA virus, and Saroyan attempts to isolate white blood cells from the heart.  Hodgins studies the larvae on the victim's clothing, which puts her in the Coral Hills, MD, area near time of death.  Still, ID is proving difficult because they can't get fingerprints, her mandible and maxilla were smashed, precluding dental identification, and Angela's facial reconstruction scanner is getting multiple hits in the missing persons database.  Brennan pores through the likely candidates on Angela's screen, and based on the prominent zygomatics, identifies Mia Garrett.

Booth questions Mia's boyfriend, Ben Carr, who reveals Mia was a blogger who focused on stories about big pharma, medical research, and doping in humans and animals.  He is also a blogger, writing about travel. Angela tries to get through Mia's computer files, but her steganographic encryption is cumbersome.  Of course Angela gets around it, and finds that Mia last spoke with Dr. Tessa Burke about mutations of SARS, Lassa, and yellow fever.  Booth questions Burke, but she didn't know Mia was dead and was highly interested in working with her to expose illegal and unethical issues with labs.

The Jeffersonian team is still trying to figure out the pathogen.  Blood results suggest it is not aerosolized, and the bone damage is similar to multiple myeloma, a fast moving type of cancer.  The lack of response to antibiotics further suggests that the disease is viral.  Brennan takes a bone marrow sample, and she, Jacobs, and Vaziri get ready to move the remains.  Vaziri, however, gets stabbed by a small needle embedded in the victim's humerus, potentially exposing him to the disease.  The bone marrow sample, however, tells Brennan, Saroyan, and Jacobs that the virus is similar to chikungunya (or CHIKV), owing to the look of the fibroblasts and the monocyte-derived macrophages.  The strain, however, cannot be positively ID'ed, which means there is no immediate cure for Vaziri, and the team has to figure out how the pathogen was mutated and by whom.

Booth questions Byron Fuller, who worked at a lab making performance-enhancing drugs for horses and who was sleeping with Mia.  Nothing infectious is found at his lab, though.  Then Ben the boyfriend gets questioned again, since he was writing about travel in the Indian rain forest when he found out about Mia's affair with Fuller.  Ben has access to syringes because he's a diabetic, but they end up being a different gauge.  Booth checks into Burke again, as Mia had been zeroing in on Biosafety-Level 4 labs capable of mutating pathogens; Burke worked for SimaTech BioLabs two years ago, but had been fired.  This time, he approaches Burke's former boss, Dr. Leonard Thorne, who accuses Burke of having stolen cultures of CHIKV from the lab.

Meanwhile, Vaziri is not doing well.  His fever spikes, he seizes, and his joints start to deteriorate.  The serum the CDC has for CHIKV doesn't help, but Brennan and Hodgins concoct an herbal folk remedy that gives Vaziri some more time by slowing the progression of the disease, and Saroyan and Jacobs induce hypothermia. 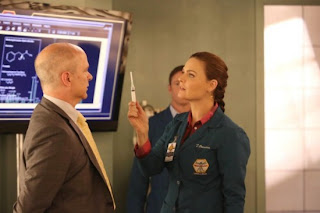 Brennan re-scans Mia's bones and notes an active pathogen still in her body.  One of the long bones is bowing outward, and the site of injection at the humerus has developed a pocket in the trabecular bone.  Something had been added to the CHIKV.  Saroyan notes the presence of prokaryotes, and Hodgins identifies a strain of botulism toxin, one that's lab grade and therefore strictly monitored by the CDC.  The nearest lab turns out to be SimaTech, but they were only given clearance for it in the last year, meaning Burke could not have mutated the CHIKV or killed Mia.  Burke fingers Thorne, whose unethical practices she tried to shut down two years ago and that got her fired, as he was close to losing a large NIH grant and had been scrutinized by Mia.  Booth arrests Thorne at his office, but Thorne refuses to admit guilt or to provide the antidote, so he hauls him to the Jeffersonian to look at Mia's remains and to see what the virus is doing to Vaziri.  Even after an impassioned plea from Saroyan to save the man she loves, Thorne remains unswayed, so Brennan lies to him, telling him they have isolated the mutated CHIKV and injecting him with a syringe.  All is well, though, as this convinces Thorne to produce the antidote, which saves Vaziri's life.

Ratings
Forensic Mystery - C. Victim was ID'ed pretty quickly.  Not too much of a mystery there.

Forensic Solution - D. The sex estimate was good; the age estimate based on dental wear was not. Facial reconstruction was unrealistic.  ID was never confirmed.  Buh.

Drama - B-. A bit of tension with Vaziri.  I didn't think they'd kill him off, but then again, they offed Nigel-Murray, so I wasn't going to put it past the writers.  I do hope Pej Vahdat's career takes off soon, though, so maybe there will be a Vaziri-offing at some point.

Rebecka said…
I know that using dental wear in humans today isn't very good with our access to dental care and processed food. But what about archaeologically? I seem to recall our human osteology course bringing it up, but it was several years ago. And if so, shouldn't it vary with time period/culture since the diet differ?

Kristina Killgrove said…
Rebecka - Exactly. Dental wear has been used archaeologically, but you have to have a good sample (cross-section) of the population, and it's not generalizable to different times/places/diets. With the rise of palaeodietary analysis in the last 20 years in particular, bioarchaeologists have stepped back from using dental wear to age skeletons because we've realized that even different people within the same population were eating different things (e.g., males and females). It just doesn't work the way we used to think it did. (That said, plenty of bioarchs around the world are still using dental wear; it's not a good thing.)

And yeah, dental wear in modern populations is kind of silly. We have no idea what people were eating. We don't know if they ground their teeth or not. We don't always know the extent of their dental work (and some people need crowns or dentures at a very young age, others not until they're much older).
24 April, 2013 13:03