The Maiden in the Mushrooms
Episode Summary
A couple on a scavenger hunt finds a body covered in mushrooms in the dirt floor of an abandoned building.The Jeffersonian team and the FBI are called to the scene.  Hodgins identifies the variety of mushrooms as ganoderma, enokitake, bunapi-shimeji, and hypholoma.  The frontal eminence and orbital margins tell Brennan the skeleton is from a Caucasian female.  Cranial sutures suggest she was in her mid-20s at death.  Based on the size of the mushrooms, Hodgins estimates time since death at 20-30 days, and then based on larvae he examines at the lab, 20-23 days.  The victim has expensive shoes, a good manicure, and nice teeth, suggesting she took good care of herself.  Sweets thinks that it was important for the woman to look good, that she was living beyond her means, and also suggests that her burial face-down indicates her assailant knew her and didn't want to face her. 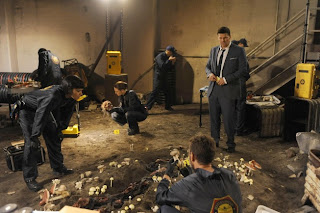 At the Jeffersonian, Brennan finds hairline fractures to the occipital, indicating a blunt injury, but not one that would have killed her. Multiple fractures to her distal and medial hand phalanges and her metatarsals suggest she put up a struggle. Epithelial cells under her nails eventually come back as being her own DNA, but there are also purple nylon fibers. Angela gets a match back from the missing persons database -- Rebecca Pearce, who worked as a producer on the Judge Trudy reality courtroom show. The possible suspects in the case are therefore Judge Trudy Morris herself, the bailiff Griff (who was in a four-year-long relationship with Rebecca and shared custody of their dog, Isis, after their breakup), Jill Roberts (the interim producer), and a disgruntled guest on the show, Pabla Sepulveda.

Brennan and Abernathy reexamine Rebecca's skeleton and note a zygomatic fracture that occurred about three months prior to her death.  Booth questions Gordie Rand, a man that Rebecca met on an online dating site who was stalking her and against whom she had a restraining order.  Although Gordie is creepy, sending her tortured Barbie dolls, he doesn't seem to have killed Rebecca.  They find out via tape from the show that the zygomatic fracture actually came from Judge Trudy, who came to work drunk and either accidentally or purposefully hit Rebecca in the face with her gavel.  Rebecca then outlawed liquor from the set, but Jill started sneaking it in for Trudy.

Another reexamination of the perimortem fractures to Rebecca's skeleton shows that she jumped or dropped down onto a hard surface, causing damage to her talus, calcaneus, and distal fibula.  Previously unmentioned hairline fracturing to the hyoid noticed by Abernathy could have resulted from strangulation, which was the likely cause of death.  Because Rebecca was young, the hyoid wouldn't necessarily break when she was strangled.  Abernathy and Angela try to reconstruct the pattern of injuries but are having a difficult time matching them.  Brennan comes in for the a-ha moment: Rebecca was strangled, and then dropped, causing the fracturing to the hyoid first and then to the legs.  Three small nicks on the anteroinferior mandible seem to be the result of spikes, as on a dog collar.  Booth gets a warrant to search Griff's home and finds Isis' dog collar, which has a purple lining and studs.  Griff owns up to killing Rebecca -- he loved that dog, but they had joint custody.  Rebecca had left Isis on the porch, on a leash, and Isis seems to have jumped off, effectively hanging herself.  Griff was upset that Rebecca would get away with neglecting his dog, so he killed her in the same way.


Ratings
Forensic Mystery - C.  I guess there was a mystery about how Rebecca died.  But the only reason they didn't figure it out earlier was because the anthropologists weren't doing their job properly.

Forensic Solution - C+.  They did figure out who the victim was and how she died... based on spurious hairline fractures, though.

Drama - D.  This episode was all over the place.  When the tag at the end of the episode is more than one quick scene, there wasn't enough forensic stuff going on.

Rebecka said…
At least they managed to put the fibula on the "outside" now.
But yeah, I don't understand what's so hard about the innominates. They're pretty darn distinctive!
02 April, 2013 08:33