The Survivor in the Soap
Episode Summary
Saroyan and Viziri are planning to knock off for a romantic dinner together when an FBI agent brings in a barrel found at a hazardous waste disposal facility.  When he cracks the lid, a skeletonized arm comes into view.  Booth and Brennan, who are at home having dinner and arguing about where to take a vacation, get the call and come in to work on the body in the barrel.

From the distance between the lunate and the third distal phalanx, Brennan guesses that the victim was male. Hodgins estimates from the state of the remains and the solid soap forming on the skeleton that time of death was at least 36 to 48 hours before.  Once the chunk of soap-skeleton is out of the barrel, Viziri examines the skull and finds a broad nasal aperture with rounded nasal sill in addition to a protruding mandible, which suggests African ancestry.  Brennan comments that the shape of the skull is more specifically West African.  Based on the lack of osteoarthritis osteophytes, Viziri and Brennan estimate the man's age at death between 20 and 30 years.  Unspecified lesions Viziri notices on xrays of the skull are diagnosed by Brennan as indicative of yaws, a treponemal infection common in sub-Saharan Africa.  From those brief descriptors, Angela gets a hit in the missing person's database, as Symchay Conteh was the only young West African man to go missing in the last few days.  He was reported missing by someone claiming to be Alvin James, who sounds like he was calling from a gas station.

Sweets and Booth visit Symchay's apartment, where the janitor, also from Sierra Leone, lets them in.  There are no photos of Symchay's life as a kid -- no pictures of parents, friends, or himself prior to age 18.  His bed is made, but the couch isn't.  Booth suspects he was letting someone stay on his couch, and there are taxi cab logs that confirm someone else was in the apartment.  Booth talks to Alex Radziwill from the State Department.  Alex tells him that Symchay migrated from Sierra Leone to Guinea and applied for refugee status there as a young teen.  Shortly thereafter, he immigrated to the US and applied for asylum at age 14.  He was granted it, and became a US citizen five years later.  Although Symchay had lots of part-time jobs, he worked regularly for Wilford Hamilton, an immigration lawyer, helping newly arrived refugees get on their feet and find jobs and apartments.  Hamilton puts them on the trail of Breema Cheloba, who was deported back to Sierra Leone two years prior for almost killing a man in a street fight.  Cheloba is back in the US illegally, but neither Hamilton nor Symchay turned him in.  Fingerprints at Symchay's apartment confirm that Cheloba was the one staying on the couch.

Viziri tries to figure out cause of death, but the old injuries to Symchay's skeleton make that difficult.  Viziri finds at least eight healed antemortem injuries, such as fractures to the tibia, clavicle, and mandible dating to childhood.  Bone deformation in the knees, vertebrae, and feet suggests he had to carry heavy loads while barefoot.  Brennan notices asymmetry in the shoulder joint; in Darfur, she saw this injury in child soldiers forced to carry and shoot AK-47s.

A check Symchay received before his death leads Booth and Brennan to an art gallery, where Kimberly Singer is exhibiting photographs she took as a war photographer in Sierra Leone nearly two decades ago.  She met Symchay once, when she was hiring him to cater her gallery opening, as Symchay was trained as a chef.  He broke down upon seeing a photograph in the exhibit, though, and she didn't see him after that. Brennan notices a boy in a photo and, based on the shape of the skull, the anterior nasal spine, and the mandible, the child is Symchay himself.  Singer is astounded by this news. Although she has potassium hydroxide in her studio to develop photographs, she denies using it to attempt to cover up Symchay's murder.

Back at the Jeffersonian, Viziri has found cause of death: a linear cut to the right clavicle with adjacent fracturing on both the right and left sides of the cut.  Someone must have employed a stab-and-cut motion to kill Symchay, the kind you'd use with a bayonet.  Angela has compared the 911 missing person's call with taxi dispatch calls and finds a match: they think the driver of the cab and the called-in tip were both Breema Cheloba.  Booth tracks down Cheloba, who is using a friend's cab to make money because he is in the country illegally, but Cheloba insists that Symchay was his friend, and he called him in as missing because he was worried.  Cheloba talks about his amputated hand: he was asked to kill his teacher; when he refused, the rebels killed her, then cut off his hand to teach him a lesson.  Viziri realizes that Cheloba couldn't have killed Symchay because the motions necessary to create the bone injuries couldn't have been done by a one-handed man.  When Hodgins reports that the wound to Symchay's clavicle included chrome-plated steel and potassium chloride, commonly found on AK-47s, Viziri gets upset and accuses Hodgins of doing a bad job.  It's impossible to slice the clavicle with the barrel of an AK-47.  Saroyan reprimands Viziri, who later admits that, during the first Persian Gulf War, one of his cousins was forced to become a child soldier and was killed, so the case was hitting close to home for him. 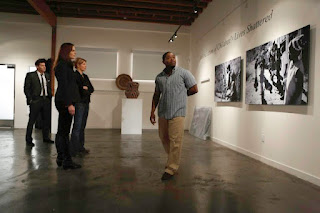 After a late-night brainstorming session Chez Booth&Brennan, the two of them and Cheloba head back to Singer's gallery exhibit.  Cheloba hasn't seen the pictures, but Symchay had been aware of the photograph of himself; it was published a few years prior.  What Cheloba notices, however, is a photo of Joseph Embarga, who recruited thousands of child soldiers and was eventually indicted on dozens of war crimes.  Booth takes a closer look and realizes that Embarga is the janitor who let him into Symchay's apartment.  At the FBI, Booth questions Embarga, who insists he is Tony Dennis, in the US legally.  He was never fingerprinted, and any DNA evidence from Sierra Leone was destroyed in the revolution.  Embarga knows that Booth has no physical evidence on him.  But Booth keeps Embarga talking so that he can have Angela do a voice-match between a previous recording of Embarga and his FBI questioning, to prove it's him and to have him extradited to The Hague to stand trial for war crimes.

Viziri and Brennan finally find the missing piece of the puzzle: a second stab wound to the victim's atlas.  They think Symchay was stabbed with a double-pronged weapon made of chrome-plated steel.  Brennan realizes that Wilfred Hamilton has an African tribal mask on the wall of his office, likely made out of a reclaimed AK-47.  She, Booth, and Alex storm Hamilton's office, and a blacklight reveals blood on the mask, which Brennan suggests will prove to be Hamilton's and Symchay's; reflective infrared spectrosopy will verify that the blood was deposited at the same time.  In essence, Symchay realized that his janitor was a wanted war criminal.  Rather than confronting Embarga, he confided in Hamilton.  However, Hamilton killed Symchay and blackmailed Embarga so that he could afford to keep his refugee center up and running.