The Tiger in the Tale

Episode Summary
A couple whose car is stuck in a muddy ditch finds a body when the rear tire spins and flings bits of corpse at the husband.  The Jeffersonian team is called to the scene, and in spite of the flattened face that ended up on the husband's shirt, Brennan identifies the deceased as a white male in his late 20s from some tiny bit of cranium.  When the witness complains of having something in his throat, Brennan gives him ipecac and makes him hork up a tooth. 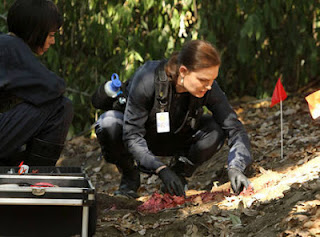 At the Jeffersonian, Brennan and Daisy go over the damage to the skeleton.  Trauma to the capitate, hamate, and styloid process of the third metacarpal is significant and suggests a high-velocity gunshot wound to the hand, likely from a 9mm, that happened around the time of death.  A crown on the lower left third molar suggests a trip to the dentist in the past 5 years, but additional fillings and heavy calculus on the remainder of the mandibular dentition suggest lack of very recent dental work.  Hodgins finds a plethora of stuff in the victim's boots and thinks he may have been at the fairgrounds recently.

Brennan and Booth visit the fairgrounds and talk to Juan, the foreman of a day laborer crew.  He looks at some of Angela's proposed reconstructions and thinks one looks like Jared Drew.  Drew's ex-wife took out a restraining order on him, so B&B talk to her and her new husband back at the FBI.

Meanwhile, Daisy is still working on the skeleton.  She reconstructs the skull and Brennan identifies the most hilariously shaped exit wound ever.  The size of the projectile trauma suggests a 45 caliber bullet and possibly two guns.  Daisy notes the beginning of asymmetrical arthritis on the skeleton, which is not a typical pattern of day laborers.  It's not normal arthritis, she finds; it's osteonecrosis that resulted from blood poisoning.  Linear striations on the lunate and trapezium suggest the victim was slashed so deeply that bacteria were introduced into his blood stream.  Saroyan's DNA analysis reveals the cause of the slashes was a Siberian tiger, a pure-bred animal that is illegal to buy and sell in the U.S.  She also realizes that the victim held his hand up to his face when he was shot with a hollow-point bullet, which explains the patterning of the trauma as well as the differences in size of the projectile trauma in the hand and head.

With a victim identified, cause of death revealed, and motive established, all that's left is finding the bad guy.  There were several farms nearby that could have housed a Siberian tiger.  Booth can't get a warrant, so Hodgins flies a WWII Spitfire replica model airplane around and homes in on a farm with cages.  Booth and Brennan pay the landowner a visit; he has a number of exotic animals, but the tiger-sized cage is empty.  Brennan follows some circling vultures and finds the decomposing remains of the tiger, which the landowner insists he had to kill in self-defense.  The guy who bought the tiger could tell that Drew was sick when he delivered it, but he knew there was another guy who stayed in the truck.  Booth and Brennan go back and talk to Juan, who was the middleman for the money, as he took an envelope from the tiger-buyer.  He claims he passed it on to Nibling, the owner of the exotic show-pet business that was just at the fairgrounds, and that Nibling asked him to send his best day laborer as well.  Juan realizes that Nibling had been illegally dealing in exotic animals, in spite of all his protestations that his business was legit.

Booth and Brennan confront Nibling in the FBI interrogation room.  Nibling isn't looking so hot, though, and Brennan realizes that he was injured by a piece of Drew's bone when he killed him, thereby causing blood poisoning.  Nibling insists this isn't true, but Brennan finds a fresh, festering wound on his right pinkie.  He gets charged with murder and, presumably, illegally dealing in exotic animals.