Return of the Mona Lisa (or at least her bones...)

Author's Note: I wrote this piece last year for Past Horizons, but in light of the discovery a few days ago of the rest of the skeleton of the Mona Lisa model, I thought I'd reprise it and add some new commentary at the end.

Facial reconstruction is a technique that most fans of Bones and other crime procedurals are likely familiar with. Using skeletal remains and a knowledge of anatomy, a forensic artist puts a flesh-and-blood face on a desiccated cranium to aid in identification of a murder victim. Within the world of ancient bodies, reconstructions have been done to bring to life the faces of the Egyptian pharaoh Tutankhamen, the Palaeoindian known as Kennewick Man, and “Moora,” an Iron Age girl found in a German peat bog. Tut’s high cheekbones, K-Man’s strong jaw line, and Moora’s close-set eyes are among the features that individualize these ancient people and make them somehow seem more modern, more like us.

Yet facial reconstruction is a controversial technique in forensic science owing primarily to its subjectivity. The contemporary practice was championed by anthropologist Wilton Krogman in the 1960s, and forensic artists have been steadily working since then. Methods of creating a face from a skull include both 2D drawings based on photographs or x-rays of the skull and sculptures or computerized 3D models based on general information about average musculature and tissue thickness. The problems with forensic facial reconstruction include the lack of information about how tissue thickness varies by body type, particularly in terms of age, sex, and weight, as well as a lack of standardization in methodologies used to create the faces.  Forensic artists cannot accurately reconstruct eye color, hairstyle, skin color, or nose shape from a skull – traits whose variation is precisely what allows us to distinguish someone we know in a crowd. In the U.S. federal courts, forensic artists cannot testify as expert witnesses because each facial reconstruction is different and the data they are based on are incomplete. The technique therefore does not meet the Daubert Standard, a legal precedent about the admissibility of scientific evidence. Innovations in computer-assisted modeling are advancing this field, but it remains largely a subjective interpretation of living facial features from skeletal remains.


In a recent attention-seeking gambit, Silvano Vinceti – Italy’s self-proclaimed art history super-sleuth – decided to dig up the remains of Lisa Gherardini del Giocondo, the woman who likely posed for or inspired Leonardo Da Vinci’s Mona Lisa. Gherardini’s death certificate, discovered in 2007, suggests she was buried in a crypt under the floor at St. Ursula’s convent in Florence. In April 2011, Vinceti announced his intention to find the long-forgotten tombs under the convent, excavate them, isolate any bones that match the age and sex of Gherardini, confirm this through DNA analysis, piece together the skull fragments, complete a facial reconstruction, and determine once and for all that Lisa Gherardini was indeed the Mona Lisa. Seemingly a tall order and a convoluted process, but on May 11, 2011, the archaeological team started digging. A day or two later, the team announced they had found a staircase leading to the crypt as well as two tombs and a brick vault. And on May 20, 2011, they announced the finding of a female-sized skull. The recently published photographs of the bones that may be Gherardini’s show that the skull was quite damaged and the other skeletal elements are quite fragmentary:


Assuming the archaeologists have found Gherardini’s skull (that is, assuming it can be DNA typed to her relatives), facial reconstruction from these remains cannot be anywhere near precise. Tutankhamen, Kennewick Man, and Moora were all subject to multiple facial reconstructions performed by independent forensic artists. In spite of what the researchers who commissioned the reconstructions say, the alternate faces of each of these three long-dead people bear only a passing similarity to one another, even though they were based on the same relatively complete skull. For example, below are three independent reconstructions of Moora's facial features from her skull: 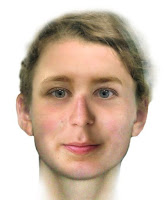 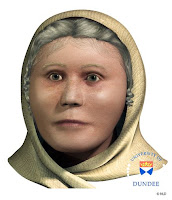 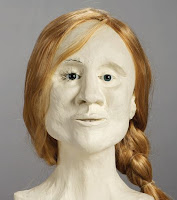 Superimposition of a partially-transparent Mona Lisa image over an x-ray of Gherardini’s broken skull may very well show that some anatomical features of the face are aligned, but it is not possible to conclusively identify Gherardini as the Mona Lisa from facial reconstruction.

The rapid, staccato pace at which Silvano Vinceti and his team are releasing information to the media shows his ability to harness public interest in his theory about the woman behind the famous Mona Lisa painting. Vinceti himself, though, is quite a controversial figure. In June 2010, he claimed to have found the remains of Caravaggio, a claim that was quickly disputed. He claimed in January to have found the symbols S, L, and 72 in Mona Lisa’s eyes, but art historians called his evidence unsubstantial. In February, Vinceti claimed a male model may have posed for the Mona Lisa, a theory that a Da Vinci expert called “groundless.” On the other hand, some news media portray Vinceti as “a modern-day Indiana Jones investigator” and “art’s self-styled super-sleuth.” These reports tend to characterize him as a researcher on a tenacious quest for the truth. The Wall Street Journal, however, has noted that Vinceti is neither a trained historian nor a scientist – he is a TV host and producer – and that his “colleagues” in Italian art history note his “wicked use of the mass media” to distract the public from serious historical inquiry.

But the public is savvy – they can distinguish between real research and outright sensationalism, as can be seen in many of the comments on the Telegraph’s original report of the Mona Lisa excavation plan. Although the excavation is being carried out in a professional manner, Vinceti’s quest to dig up the “real” Mona Lisa is not grounded in scientific research methodology. The news media’s breathless coverage of it threatens to signal to the public that archaeologists are frivolous with their time, energy, and research money.

With the shortage of academic jobs for newly-minted PhDs and fear of funding disappearing with the recent announcement that Fulbright-Hays and other U.S. government-sponsored research programs are cancelled for the year, it is especially important to harness public support for archaeology by putting faces to skeletons, which helps us connect with the public on a more emotional level. But what we cannot do is throw around ideas willy-nilly and claim that we can solve Dan Brown-style mysteries with our capital-S science.

Silvano Vinceti may have stumbled upon the grave of Lisa Gherardini, who may have been painted as the Mona Lisa. But attempting to wrangle a few bits of bone into an archaeo-forensic assessment of a particular person – an assessment that has already been determined by Vinceti – is almost certainly a ploy to drum up interest in Vinceti’s generally harebrained theories rather than a serious inquiry into the past.

The search for the rest of Gherardini’s skeleton was on hold until Italian archaeologists announced the discovery of additional bones on July 18, 2012.  Like the cranium, the postcranial bones don't seem to be in great shape, although that doesn't necessarily preclude osteological analysis:
Like last year, Vinceti's plan is still to DNA match the bones to Gherardini's descendants to prove they belonged to her rather than to Maria del Riccio, another noblewoman whose remains were also interred at Sant'Orsola, and then to commission a facial reconstruction.

By all accounts, Gherardini lived a quiet, ordinary life, and it's unfortunate that she cannot have a quiet, ordinary death.  I can't think of any scientific reason to pour so much money and effort into finding the skeleton of a woman who posed for a (famous, admittedly) painting.  At least with Farinelli and even with the proposed exhumation of Shakespeare, there were arguably legitimate research questions about their lives and bodies.  Facial reconstruction of the skull of Lisa Gherardini will not give us any information whatsoever about her life or the painting she posed for. Sure, osteological analysis may reveal some insight into her diet, her health, or her behavior, but these data will be difficult to contextualize because of the lack of analysis of other skeletons from the same time period and location.

Exhuming Lisa Gherardini and studying her bones will sate our need for osteobiographies of famous people of the past.  And it will almost certainly bring more tourist dollars to Florence, especially if the skeleton goes on display.  But it won't contribute anything substantial to forensics, archaeology, or art history, so I still don't see the point of disturbing the Mona Lisa.

Judith Weingarten said…
Although I'm an archaeologist and keen on skeletons, I simply don't understand how Vincetta got permission to disturb a Christian burial.
19 July, 2012 15:38

Sumo UK said…
I agree with you. Disturbing the grave of Lisa Gherardini will not contribute to any major discovery. It will however satisfy our curiosity about the famous lady.
21 July, 2012 07:46

George Myers said…
I suppose as done in the film "Gorky Park" and more recently on television by the "former" chief M.E. on "Body of Proof" played by Jeri Ryan, that it is believed it can be done. I suppose there may be other data, i.e., anthropologist Franz Boas studied bone development from arriving immigrants, and the noted increases in the American population, due to multiple dairy products, that could be generalized about Mona Lisa. It might help prove if not, why not someone else at the minimum.
23 July, 2012 22:42

TreasureForever said…
I am appalled that this disgusting project is being pursued! Why on Earth would anyone want to disturb/reconstruct/inspect/see "the real" Mona Lisa's skeleton. This is gross in so many ways. No real fan of art, specifically Da Vinci's work would support this. Any person involved in this I have total disrespect for.
16 September, 2012 05:23

I don't see why mainstream Archeologists are so critical of their alternative counterparts. The fact is they both should be working TOGETHER to expand their own knowledge.
16 September, 2012 13:46

Cajeme said…
My guess as to reason for disturbing the remains, there's that whole DaVinci Code theory that the face on the Mona Lisa painting is actually DaVinci's, as some sort of Renaissance practical joke. If they could reconstruct her face, then they might be able to distinguish between her feature's and DaVinci's. Might.

Anonymous said…
Very good article overall, but I disagree with a couple of points. First, osteological analysis of famous people does have a ready context: a historical one. So, it can help us find out if history tells the truth. Secondly, for art historians the question who the lady in the famous Leonardo painting really is is a very important one, which could shed more light in Leonardo's life as well. So if there were a reliable method to know for sure whether she is Mona Lisa, it would solve one of the most important mysteries in art history.
01 September, 2013 17:43