I'm currently in the Netherlands, for a short conference that happened yesterday.  It was all kinds of awesome, and I promise I will blog about my contribution (including the new charts I made because charts make me happy) soon, but I wanted to put up some rather more touristy pictures.

Given my professional interests, I'm often what you might call a "death tourist."  No, let's call it a "thanatourist" because portmanteaux sound much fancier.  I've always loved checking out cemeteries in different states and different countries.  But the neat thing about Europe is that most places have some kind of natural history or science/medical history museum.  And I always go.  This afternoon, after wandering in the sunny 60-degree day through the various Saturday markets, snagging some souvenirs in shops along Haarlemerstraat, and visiting a cemetery near Zijlpoort, I spent a couple hours at the Museum Boerhaave.

The museum was officially established in 1931 and is now located in the former convent/hospital of St. Cecilia (Caeciliagasthuis), which dates to the early 15th century and was also a lunatic asylum for a while.  (Gotta love buildings that predate the discovery of America and are still standing...)  It holds scientific and medical instruments  of all kinds, from the first EKG machine to Leyden jars to the only two remaining thermometers crafted by Fahrenheit.  I largely ignored all these things, opting to spend most of my time with the 18th century anatomists the Albinus brothers, Brugman's collection of random body parts, and the rather infamous Anatomical Theater, a full-scale 1988 reconstruction of the original theater built in 1596, which has been decorated with nearly a dozen skeletons in various poses, holding banners in Latin with pithy sayings about death...


There were also a number of collections of interesting anatomical specimens and teaching models:
And last but not least, some skulls, all definitely collected in a time before osteology and anthropology...


For those of you who also find wandering through cemeteries to be as peaceful as I do, this is from one I found near Zijlpoort (although I didn't stop to find out the name of the church): 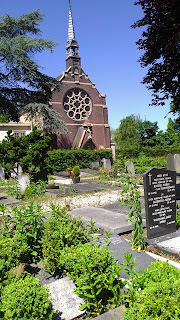 I might have to take a break from my thanatourism tomorrow as I head up the road to Amsterdam.  After all, there are windmills to see, tulip fields to trip through, and silly wooden shoes to buy.

Kristina Killgrove said…
Thanks for the info on the cemetery and chapel! There was someone tending the graves when I visited, so I suppose I could have asked her, but I didn't want to be rude.
03 June, 2012 17:03

AML said…
You have a very interesting interest. It is my first time to encounter such a word thanatourist, but I have learned a lot about portmanteaux, and skeletons, and medical instruments from the past.
04 June, 2012 01:09

stan09 said…
"Gotta love buildings that predate the discovery of America and are still standing"
I know this was a throw-away comment but america wasn't discovered by Columbus
04 June, 2012 03:41

Kristina Killgrove said…
I went back and forth when writing on the "buildings that predate the discovery of America" comment but ultimately decided to leave it in (rather than something like "buildings that are older than Europeans' realization that there was a whole other continent across the sea..."). I thought someone might ding me for using the easier phrasing...
04 June, 2012 04:00