Just about a week ago, students, faculty, alumni, and other members of the UVa community received an email announcing the sudden resignation of President Teresa Sullivan.  This came as a surprise to all because Sullivan, the first female president of a school founded by Thomas Jefferson, was only two years into her tenure and was, by all accounts, an effective and compassionate leader.

In the week since the announcement, rumors have swirled, emails have been leaked, and an emergency faculty senate meeting - convened on a Sunday evening - had record turn-out and a near-ultimatum from the current provost.  I don't presume to have all the facts about this situation, although it sure seems that Sullivan's resignation was tenaciously sought and manipulated by the Board of Visitors.  One of the stated reasons: Sullivan was unwilling to make cuts to cash-negative departments like classics.

As a proud UVa alumna and classics major, I found it difficult to believe that anyone would want to cut a discipline that studies the very foundations of Jefferson's thinking and therefore much of our contemporary governance.  What did the Founding Father - a polyglot who learned Latin and Greek at age 9 - say about the classics again?


For classical learning, I have ever been a zealous advocate.  -- Letter to Thomas Cooper, 1814

Among the values of classical learning, I estimate the luxury of reading the Greek and Roman authors in all the beauties of their originals. -- Letter to John Brazier, 1819

I think the Greeks & Romans have left us the present models which exist of fine composition, whether we examine them as works of reason, or of style & fancy; and to them we probably owe these characteristics of modern composition. [...] To all this I add, that to read the Latin & Greek authors in their original, is a sublime luxury; and I deem luxury in science to be at least as justifiable as in architecture, painting, gardening, or the other arts. [...] I thank on my knees, him who directed my early education, for having put into my possession this rich source of delight; and I would not exchange it for anything which I could then have acquired, & have not since acquired. -- Letter to Dr. Joseph Priestly, 1800

Our culture is, of course, different now than in Jefferson's day.  Latin and Greek are no longer the language of scholarship, nor is French.  Scientists who discover a new species no longer have to describe it in Latin, although taxonomy still roughly adheres to traditional nomenclature drawn from the classical languages.  The Father of the University of Virginia likely didn't foresee English becoming the lingua franca of academia or the United States becoming a world power.  But he did understand very well how higher education should work:


When sobered by experience, I hope our successors will turn their attention to the advantages of education.  I mean of education on the broad scale, and not that of the petty academies, as they call themselves, which are started up in every neighborhood, and where one or two men, possessing Latin and sometimes Greek, a knowledge of the globes, and the first six books of Euclid, imagine and communicate this as the sum of science.  They commit their pupils to the theatre of the world, with just taste enough of learning to be alienated from industrious pursuits, and not enough to do service in the ranks of science.  I hope the necessity will at length be seen of establishing institutions here, as in Europe, where every branch of science useful at this day, may be taught in its highest degree. -- Letter to John Adams, 1814

Thomas Jefferson's UVa is one of the preeminent public universities in the country, and his successors deserve great credit for continuing his vision of what higher education in the United States should be.  UVa offers a range of classes in a huge variety of disciplines, which is the very reason I decided to attend it: to broaden my education and my understanding of both the sciences and the humanities.  Growing up in Charlottesville, though, makes it hard not to model one's education after Jefferson's.

I don't know the full story behind Sullivan's ouster, but I sincerely hope that the rumors about cutting departments and providing online degrees aren't true. To make UVa a "petty academie" would mean denying the youth of Virginia the well-rounded education that Jefferson so strongly advocated. 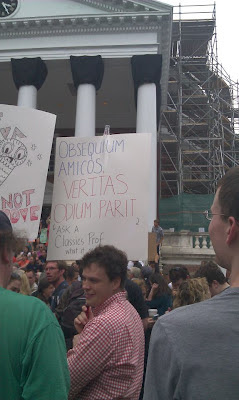 Lynn said…
There are lots of new models to emulate, once the University of Virginia is freed from the tyranny of the Founder's vision. (Insert supportive Jefferson quote here about overthrowing tyranny, moving forward, prospering? We know one exists) If money is the new goal, teach a useful skill, like plumbing. Or emphasize marketing and structure admissions so you get tons of online students, but no one ever graduates. Offer financial aid at rates just south of usury. Or, see students through to graduation, but in areas like cosmetology and massage where no jobs exist. Or, hell, give up education entirely and start a payday loan biz, open a casino, become venture capitalists.
18 June, 2012 10:24