I don't talk a lot about the Roman Republic.  It immediately preceded the Empire, which was set in motion by Julius Caesar (and got him killed) and presided over by Augustus as the first emperor.  I've always been most interested in the Imperial phase of Roman history - after all, they had flush toilets, a complex aqueduct system, awesome poets, an international army, massive building programs, and tons of geographic mobility.

This morning, I ran across an interview with MIT's William Broadhead, a Roman historian.  Broadhead puts the fall of the Roman Republic into context and explains his new theory of what precipitated the change to Empire:


[H]istorians have debated why the republic failed — and how Caesar was able to raise an army that backed him rather than the senate and magistrates of Rome. “These were effectively mercenary armies, loyal to the individual general rather than the city-state,” says William Broadhead, an associate professor of history at MIT. “How did this situation arise?”

Using a variety of sources, from ancient texts to new archaeological evidence, Broadhead has crafted a novel hypothesis about how Caesar — as well as Sulla a few decades before, and Augustus several years later — could march on Rome with his own legions.

“My interpretation is a demographic one,” Broadhead says. “Ancient Italy was a place of high geographical mobility, instead of being a place filled with sedentary peasants, which is the stereotypical image.” People in towns throughout the Italian peninsula, from whose numbers the Roman Republic traditionally recruited its army, often traveled either to the newly conquered outposts of the Roman world, or throughout Italy, in search of better living conditions.

What's cool about Broadhead's theory is that it's testable!  (What's not cool is that there's no mention in the article that it can be tested.)  Using skeletal remains and isotope and aDNA analysis, we can find out more about geographical mobility in the Republic.

And guess what?  I've already started this work.  Admittedly, there is not a lot of information about skeletons from the Republican period, in large part because cremation was the preferred rite for most of that time.  But I did study 28 skeletons from two pre-Imperial periods from Castellaccio Europarco, a cemetery in the Roman suburbs, although only 4 of them had first molars appropriate for strontium and oxygen isotope analysis.  The Phase 1 burials dated to 4th-3rd centuries BC, and the Phase 2 burial dates to the 2nd-1st century BC.

Let's take a quick look at what the skeletons told me about mobility in the Republic.  Here's the Sr/O isotope map from my dissertation (Killgrove 2010, Appendix B): 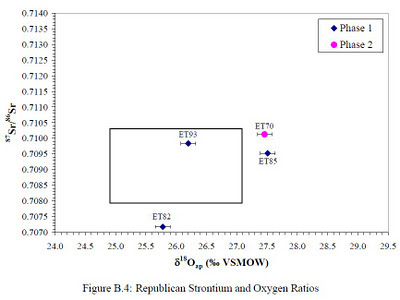 The black box represents the local limits of the city of Rome.  People within this box have isotope signatures characteristic of the soil and water of the greater Rome area (including the suburbs and the origin of the aqueducts), and those outside the box have anomalous ratios, suggesting they were not born in the area.

Amazingly, 3 out of 4 people I tested were not from Rome, and 2 out of 3 people from the early Republican period came to Rome from somewhere else. Pinpointing homeland isn't really possible, but the isotopes suggest that ET82 lived on young geology (such as the volcanoes around Naples) and that ET70 and ET85 lived somewhere slightly warmer and more humid than Rome.  Really interesting is the demographic break-down of the immigrants: ET82 was a 30-something male, and both ET85 and ET70 were 40-something females.  Yes, these are only a few data points, of course, but they raise a lot of questions about the demographics of immigrants to Rome and the structure of population movement in the Republic.

These samples may come into play in a fascinating way with my upcoming Roman DNA Project.  I plan to start by testing the Imperial samples, since they have better context and are better preserved, but if I raise enough funding, I'll start testing the Republican samples too, in order to figure out at least what their mtDNA haplogroups were.  It might also be time to take a closer look at the remaining samples I have from the Republican phases of Castellaccio - I didn't test all of them for Sr/O/C/N/Pb, but it might be worth finding the funds to do so.

One of the reasons I love working in the Roman world is that scientific testing, humanistic theories, art, and literature can converge to answer our questions about the past.  It's interesting to see, though, that the people at the forefront of this movement are historical demographers (Walter Scheidel, Rens Tacoma), anthropologists (me, Tracy Prowse), and archaeologists (Nicola Terrenato, Jeffrey Becker) - not classicists in the traditional sense.  We've got to get the art historians and literary experts on board with skeletal remains, and try to engage them in understanding and using this new line of evidence about the Romans. 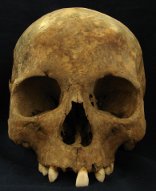 Like my posts?  You'll love my new research!  The Roman DNA Project seeks to study the genetics of people who were buried in Rome during the Empire.  It also needs your help, so please click through and provide some financial and/or moral support.

The faster I raise money, the sooner this notice goes away.  It's like an NPR or PBS fund drive, but instead of a lame tote bag, you get pictures of real Roman skeletons!