Skip to main content
Posted by Kristina Killgrove May 20, 2011

Today's Wired gives an update on the two Palaeoindian skeletons found on the grounds of UC San Diego, during construction work on the president's University House in 1976. The skeletons are important because they are very well-preserved and around 9,000 years old, making them two of the oldest known skeletons in the Americas and therefore key to understanding the population history of the continent (image credit to Jan Austin, SMC). 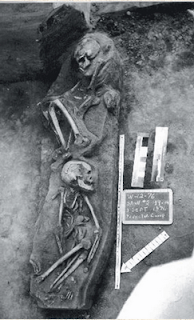 In early 2009, UC officials started the process of attempting to repatriate the skeletons to a local Native American tribe, as reported in Nature 458(265):

Officials at the University of California are moving to give two of the oldest-known skeletons in North America to a local Native American tribe, against the recommendation of university scientists who say the bones should be retained for study.

Under federal law, bones are returned to a tribe that can prove 'cultural affiliation' through artefacts or other analyses. At nearly 10,000 years old, the skeletons in question — unearthed in 1976 at the University of California, San Diego (UCSD) — are so ancient that they are not culturally linked to any tribe (see Nature 455, 1156–1157; 2008).

But last month, University of California president Mark Yudof and UCSD chancellor Marye Anne Fox began seeking a rare federal approval to give the skeletons to the local Kumeyaay tribe, which has asked for them.

Why the uproar now? A letter was published today in Science 332 (6032):916. It's unfortunately behind a paywall, but it's called "Unexamined bodies of evidence" by Margaret Schoeninger, Jeffrey Bada, Patricia Masters, Robert Bettinger, and Tim White. These anthropologists, oceanographers, and chemists are reacting to a recent Science report entitled "Do island sites suggest a coastal route to the Americas?" (Science 331 (6021):1122). In it, archaeologist Daniel Sandweiss is reported as suggesting that DNA analysis of Palaeoindian skeletal remains along the west coast of the U.S. will help us learn more about how the first people spread throughout the American continents.

The Wired report notes that:


A few studies were done years ago on the skeletons before UC withdrew access to them, but recent technological advances would allow scientists to do much more, including a digital skull calibration and possibly a full genome sequence.

Notably, one of those studies was an isotope analysis of diet undertaken by Meg Schoeninger (2009, AJPA 138:231), in which she found that the two people had consumed seafood year-round rather than seasonally, suggesting they had lived along the coast and not moved to the interior of California. These skeletons therefore hold the potential to tell us a great deal about what it was like to be one of the first people to experience life in America.
The La Jolla skeletons are around the same age as Kennewick Man, a skeleton who was found in Washington in 1996 and who has also been subject to protracted legal battles between scientists who want to study his remains and modern Native Americans who claim him as an ancestor and want to rebury him. Schoeninger and colleagues do not come out against reburial; rather, they argue in the Science letter that:

Low levels of aspartic acid racemization in the bones suggest that it might be possible to retrieve endogenous DNA. With state-of-the-art ancient DNA (aDNA) extraction, amplification, and sequencing methods, there is a strong possibility that aDNA sequences will be obtained for these skeletal remains. Such information could be used to assess their genetic affiliation, if any, with modern American Indian groups.

Namely, the bones are in such good condition that it is likely they could extract DNA from them, allowing them to find out which modern Native Americans are descended from these earliest Palaeoindians.

The debate about repatriation of Native American remains began decades ago, and was eventually codified into law with the Native American Graves Protection and Repatriation Act of 1990. With the finding of several ancient skeletons in the past two decades, though, many researchers are arguing that the antiquity of the skeletons makes them Palaeoindian, unable to be directly linked to a modern Native American group. The debate has been heated and, although I've often found myself of two minds on the matter, I typically come down on the side of learning more about the past, with the hope that that knowledge will benefit all of us who live and have lived in this country.

DNA analysis of the La Jolla skeletons would reveal a wealth of information, and I hope Schoeninger and colleagues are successful in starting negotiations with UC to study them.

Frances said…
I agree with Schoeninger, et. al. that the value of these remains and what they can tell us about the first people in North America goes beyond a tenuous ancestry claim by a native American group. At almost 10,000 years old, the ancestry line is almost certainly unprovable, especially without aDNA.