A mass grave recently uncovered at an Iron Age (440-390BC) hillfort in Derbyshire, England, hints at the context and history of pre-Roman warfare in the region [via BBC, Science & Environment News]. Archaeologists discovered "women, babies, a toddler, and a single teenage male" [pic below] in a 10m-long section of defensive ditch - and they think that hundreds more bodies may be found in future excavations. Click through the BBC link to see two brief videos about the site and the finds. 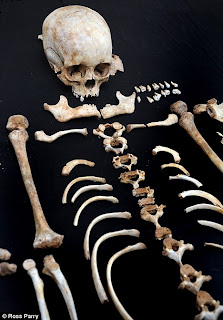 This announcement came on the heels of - for me, anyway - a very interesting and productive time at the American Association of Physical Anthropologists meeting last week in Minneapolis. And the Iron Age hillfort brought to mind Dawnie Steadman's talk at the AAPAs on violence at Orendorf, a late prehistoric Mississippian village in contemporary Illinois. Dr. Steadman's talk was titled "Why Kill Women?" but she quickly turned this around and suggested we instead ask, "Why not kill women?" I didn't take extensive notes, unfortunately, but Steadman suggested that our narratives of warfare in the past too often depict women as passive, objects to be captured because they pose no real threat to men. By showing especially the perimortem trauma on the female skeletons from Orendorf, Steadman argued that women were likely doing a significant share of the fighting, a significant share of the hand-to-hand combat that we typically think was only engaged in by men. In asking "Why not kill women?" Steadman is asserting the agency of women in past warfare and showing their importance in these critical periods of social unrest. 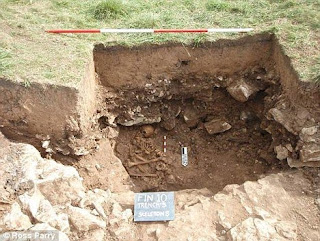 The role of women in past warfare, of course, has gone completely unnoticed by the folks over at the good ol' Daily Mail. Their version of the excavation [pic above] was just published this afternoon [click through if you dare]. The article starts off:

The screams must have been unbearable. High on the peaks of the Pennines, a terrified group of women, teenagers and children sat huddled in the half-finished ditches and walls of their hill fort, surrounded by gloating faces. The men were missing, either killed in battle or taken to one side to be pressed into military service or sold for slaves by their captors. But that left the less valuable women and children to be disposed of. Any pleas for clemency fell on death ears. Dozens, maybe even hundreds, of women, babies and children were stabbed or strangled, stripped of possessions and tossed into the ditch that encircled the fort.

I'm as much a fan as the next osteologist of personalizing the past and of telling stories or osteobiographies of a person or a group of people. But come on. Is there any evidence that Iron Age men were forced into military service or sold as slaves? (I honestly don't know.) From the reports, there's absolutely no skeletal evidence whatsoever that the women and children were stabbed or strangled. Crafting a possible life history based on biological evidence is an excellent way to get the public interested in bioarchaeology and to find out information about the past. Outright making up a story, on the other hand, does a major disservice to the work that my colleagues and I do by implying that we simply fabricate our osteobiographies.
The burials are quite interesting and have the potential to tell us a lot about Iron Age warfare and life in the pre-Roman period of England. But I'd appreciate it if the Daily Mail would just shut up for a while. Reiterating ages-old assumptions (or, worse, anachronistically applying modern concepts to the past) doesn't help us advance our findings about the past.

Anonymous said…
Amusing ideas about women and war.
I remember mixed basic training, the women could easily out do most of the men. Some of course did not. The idea of the men was that they had to prove themselves better. Reality is that was not it. It seemed to be natural for them.

Standing around screaming while there children were being killed, I doubt it. It does not follow the reality of mankind. If so we most likely would not exist today!.

And I am male.

Just a note the Amick thing found your blog. Thanks for it. Most people should be able to follow. Not an easy thing to do with Anthropology.
19 April, 2011 19:36