Jon Rafman, a Canadian artist, has a tumblr/art project I've been following for a while called 9 Eyes, in which he collects images from Google street view. The pictures he finds are amazing, but today's let me see a bit of his process: 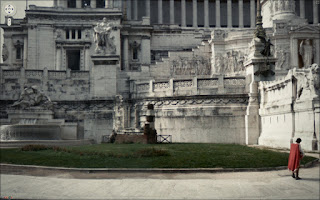 A gladiator stands with his head down, alone in front of a massive white monument. Those of us who've spent time in Rome (and who prefer the classical architecture of the city) immediately recognize the monstrosity that is the Vittorio Emanuele monument and the faux-gladiator as a fixture of the Via dei Fori Imperiali. This is the first shot of Rafman's that I've recognized, so I immediately went to street view and found it:
View Larger Map
If you zoom out and pan around, though, you'll see that the narrative I constructed from Rafman's chosen picture isn't the whole story. Sad Gladiator isn't alone - tourists crowd the front of the monument, and buses and Vespas whiz by. And Sad Gladiator isn't standing still - in another view, he's walking. Rather than a story of a man silently contemplating a monument, Sad Gladiator is telling me about a busy city whose past is important to its present, whose tourist trade is important to his own livelihood.
This photo illustrates the main challenge of Roman archaeology - of all archaeology, really. We have a static material record, often of final deposition: broken pots, useless tools, dead bodies. But what we want to get at is the dynamic quality of life in the past. One individual at one moment in his life cannot fairly show us who he is, much less what his culture is like. It's imperative that we approach the past from as many angles as possible or we won't notice what's just outside the borders of the picture.