The Babe in the Bar
Episode Summary 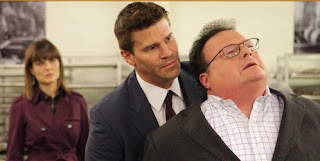 Jimmy Walpert is a modern-day Willy Wonka, who puts on a publicity stunt of crafting the world's largest chocolate bar - 6' wide x 15' long. When his employees cut into it to give his adoring public a taste, however, they hit human bone - and a river of putrefied tissue. At the scene, Brennan assesses age and sex. From the os coxae, she can tell that the victim was female, and from the degree of spondylosis, she estimates the victim was in her late 20s. The entire chocolate bar is taken back to the Jeffersonian, where it is subjected to a CT scan to see what else is inside.

Mr. Nigel-Murray (returning from his post-Jeopardy $1 million win, which he squandered on, quite literally, hookers and blow) suggests that a slight occipital depression could be an indication of a blow to the head (and an implication of murder), but Brennan counters that the victim could have had a grand mal seizure while lying in or near the chocolate mold. However, they also note that the right radius has an indication of perimortem trauma, possibly sharp-force trauma sustained in an attack. Dr. Saroyan finds that there are two trapped bubbles in the chocolate, the result of the victim's last breath. She has the chocolate cut and frozen, then extracts the gas from the bubbles for Dr. Hodgins to analyze. Booth and Brennan learn that the victim is Harriet Solloway and talk to her sister, Geneva, who notes Harriet's ability to lie and pass herself off as anyone she wants.

Back at the Jeffersonian, Brennan and Nigel-Murray find that the contusion to the occipital matches the edge of the chocolate mold. The victim's septal cartilage was crushed, there is a hairline fracture of the left frontal process of the maxilla, and pressure fractures on the orbits all indicate the victim was suffocated while submerged. Further, they note that the trauma to the right radius is actually not perimortem; rather, it is a pseudarthrosis indicating the victim sustained an injury to her arm 5-6 months before she died and did not have proper medical attention.

The results from the gas in the bubbles yield carbon dioxide as well as a variety of other gases that Dr. Hodgins traces back to Bolomo Sparkling Wines. Mr. Bolomo had a fling with both Geneva and Harriet Solloway, and Geneva was jealous and upset with her sister. During questioning at the FBI, Booth asks if Geneva caused the stab wound to her sister's right arm, but Geneva denies it. Mr. Nigel-Murray and Brennan confer at the Jeffersonian and note that the perimortem fractures support a scenario of attack: the attacker held the victim down with one hand, fracturing her sternum and clavicle, and suffocated her with the other hand. Nigel-Murray, however, notes a small, proliferative lesion on the distal edge of the fracture. Brennan identifies it as an aventitious cyst, wherein the bone formed a callus around a foreign object that had been embedded in the bone. A microslice of the cyst leads Hodgins to identify Helopeltis theobromae, an insect from Indonesia that thrives on the cocoa plant.

It turns out that the victim, Harriet, was a spy. She worked for Ambrosia, a chocolate company that competed with Walpert. During training in Indonesia, she hurt her right arm with a machete. As they were so far from medical care, she did not get proper treatment and the wound got infected. Nigel-Murray, however, finds another perimortem injury: on the fourth finger of the left hand, the victim's proximal phalanx showed asymmetry in the articular condyle and damage to the corresponding facet, as if someone had twisted her finger.

The attacker turns out to be Scott Kimper, the chocolatier who was having an affair with Harriet Solloway. He bought her an engagement ring (and hoped to leave his wife), but found out that she was a spy for Ambrosia. He had shared all of his secrets with her and felt betrayed both professionally and personally, so he killed her. Analysis of the second trapped gas bubble revealed a trace amount of blood, which was matched through DNA to Scott Kimper.

Nigel-Murray is back! Which means a whole lot of random factoids. (I can't help it, I like Nigel-Murray, especially since his turn on Mad Men.) To wit:
The less said about the "yowza" trope throughout the episode, the better.

It always bugs me about Bones that the characters constantly refer to one another by Dr. So-and-so. From now on, I want all of my closest friends to call me Dr. Killgrove (or Dr. Bone Girl). Also, I want my significant other to refer to me by just my last name, as Angela always calls her husband Hodgins. (Have you noticed that Sweets and Wick are the only ones who call one another Lance and Daisy on a regular basis?) Seriously, anthropologists are some of the most laid-back academics, and there were many professors I was invited to call by their first names as an undergrad.

Forensic Mystery - B. I was reasonably uncertain who committed murder and why, and the victim's back story was pretty interesting. (I still think that Sweets could have had more to do, since the victim was clearly a pathological liar.)

Forensic Solution - C-. I have to dock a lot of points for the whole pseudarthrosis debacle. I just don't buy that a bug would be embedded in the bone, and the bug was what led them to the victim's working for Ambrosia as a spy (and therefore to the murderer's motive). The rest of the forensics seemed reasonable (excluding Dr. Saroyan's extraction of gas from bubbles, which doesn't seem plausible) and was largely error-free.

Drama - B-. The victim's story was compelling, especially with the sister who hated her and the wake of jilted lovers. However, I prefer the forensic drama where a killer has to be caught (rather than one who spells his last name for the FBI). There was no Booth-Brennan tension, nor was Hannah anywhere near this episode. The main non-forensic drama this episode was the non-drama of Hodgins telling everyone that Angela is pregnant and Dr. Saroyan being all mother-hen about Michelle, her ward/adoptive daughter. Those story arcs were benign, though, and didn't detract much from the forensic drama.

Unknown said…
I enjoyed this episode a lot more than many of the others from this season.
Hopefully, Bones is getting over its slump. I mean, any show that has been going for this long has to have a season slump somewhere.

I am harsh on the show, but I think its because I deconstruct media academically, in addition to being a fierce fan- so I'm quite harsh at times.... ;)

onix said…
more weird puzzles. people hurt themselves to an amazing degree in the process of getting killed. i assume it suggests he had a tough time keeping her under. i don't think a cleft radius (even if i dont know what bone exactly it be) would go untreated. i actually use your writing for skeletal reference and can't doubt your knowledge there. wouldnt a pseudoarthrosis be, an arthrosis that looks like common arthrosis but has another cause? i think bugs can leave recognisable traces (looking like arthrosis at first glance) in humans and bone, allthough i would guess she had been in indonesia more then once. i think in only half a year(4-5 months) or so it wouldn't look like arthrosis as much as to be hard to seperate. otoh a trace of a bug would be small, and thus easier to confuse for a simpler wound or trace. it would usually but not necessarilly infect afaik. suffocated/strangled people do leave some traces of blood. (usually in the breathing apparatus). i don't think i am of help:)
06 December, 2010 19:22

emily said…
i never thought about them calling each other Dr. so-and-so before, but now that i think about it, it is a bit formal. all the anthropology professors i've had so far (which is only 3) have asked us to call them by their first names.
10 January, 2011 23:27

Anonymous said…
I'm not sure what you mean about the chocolate being two-dimensional. It clearly had a depth large enough for a human body, which might have been 10 inches. Thanks for clarifying about the Dr thing - I don't call anyone I know who has a PhD Dr, except as a joke. This is the single most annoying thing in the show for me.
28 October, 2012 15:15

Emily said…
I actually do call my husband by just his last name, so I find it really endearing that Angela does this with Hodgins.

Besides that, the formal Dr so and so in the workplace is irritating. Especially since Cam, who is EVERYONE'S boss, is the only one who gets called by her first name.
03 June, 2015 14:22