How 3D Hominin Models Are Paving The Way For Future Palaeoanthropologists 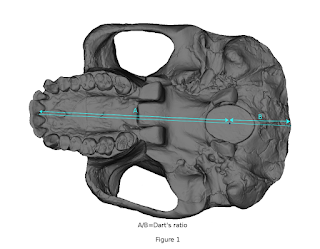 Over on my personal Facebook page, I often post snippets from people who email me, a semi-regular feature called What's in KK's Email? This is how I laugh at and offload my stress at getting cranky, mean, or mansplainy emails, usually about something I've written for Forbes. But occasionally, What's in KK's Email features emails that start like this:

"Your 2015 Forbes article about online 3D fossils pointed the way for my 15-year-old daughter to use 3D skull models for a science project. The result was her study comparing human, primate, and fossil skulls, which won the Florida award and was chosen as one of 100 regional finalists in the Google Science Fair. We thought you might be interested."

The dad who emailed me, John Thompson, also included a link to his daughter Storm's digital science fair project, entitled "The foramen magnum, bipedalism, habitat, and human ancestry: a computer study of 3D digital skulls." You can check it out yourself at the GoogleScienceFair link!


"This project compares correlations between different measurements of FM placement and posture. Using 3D scans from the Internet allowed more consistent measurements of specimens than 2D photos, and these scans were more accessible than the skulls themselves. I compared humans, extant primates, and several fossil specimens thought to be human ancestors. I compared a measure similar to Dart's original to one intended to exclude adaptations in muzzle length, and compared angles the FM makes with facial features and the upper jaw.

My results support a relationship between FM placement and bipedalism, but contradict previous conclusions about the Australopiths. However the angle the FM makes to the plane of the upper jaw (maxilla) was a better indicator of habitat, and could be used to evaluate fossil specimens' place in the human lineage. This will help us better understand our origins and place in nature."

You can even watch a 2-minute presentation of her project here:


I was thrilled that Storm was able to pursue her interest in palaeoanthropology thanks to the digitization of fossil hominin skulls. As a discipline, palaeoanthropology has been notoriously closed-off for decades, but an open access push in the last few years by heavy-hitters such as John Hawks and Lee Berger has led to huge amounts of public outreach (such as their Rising Star project that found Homo naledi).

John said that I could share his words and Storm's project here. "Collecting a wide enough variety of specimens was one of Storm's biggest frustrations," he wrote in email, "and so we were hoping her work could be used as an example to encourage more open access." In her acknowledgments section, Storm even gave shout-outs to all the folks who have made their 3D models available, as well as the open source software community. John concluded by thanking me "for pointing the way towards all those 3D resources; she could never have done this rigorous of a project without them."

Even though I am no longer teaching dozens of students each semester, it's great to know that my public outreach is paving the way for the next generation to start their anthropological future!

Way to go, Storm! Congratulations on winning the Florida award in the 2019 Google Science Fair!