When I started writing for Forbes in May of 2015, one of my goals was to diversify media coverage of bioarchaeology news. There wasn't a whole lot of it to begin with, but since I was at a regional public university at the time, I knew that as I kept writing, I wanted to talk up research by people who didn't have access to the kinds of PR that faculty at R1s have.

I also did set out to diversify my coverage geographically. Since the start, I've input all the locations of my coverage into a Google Fusion table. As of last September, this is what the map looked like (click here for the explanation of different color symbols): 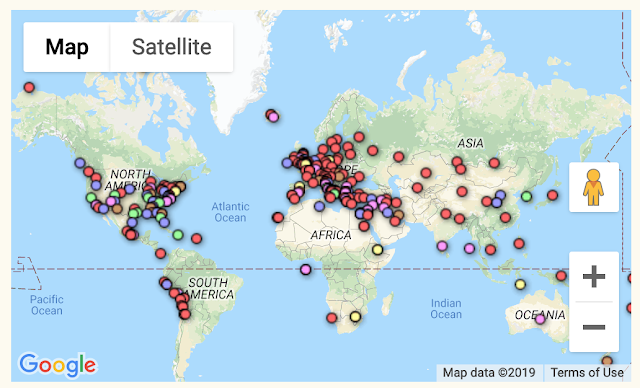 But since the field of bioarchaeology is, conventionally, more female than male, I hadn't set out specifically to gender-balance what I wrote, assuming it was probably fine.

Three years ago, science writer Adrienne LaFrance at The Atlantic wrote about analyzing her reporting for gender bias. "Male dominance in global media is well documented, and has been for many decades," she wrote in 2016. In 2013, a survey of the 2,075 people she mentioned in a year showed only 25% were women, and when she did it again in 2015, she found that that number had dropped to 22%.

A year ago, science writer Ed Yong published his own self-reflection at The Atlantic about his attempt to fix the gender imbalance in his stories. Yong wrote that "across all 23 of them [stories Yong published in 2016], 24% of the quoted sources were women. And of those stories, 35% featured no female voices at all. That surprised me. I knew it wasn’t going to be 50%, but I didn’t think it would be that low, either. I knew that I care about equality, so I deluded myself into thinking that I wasn’t part of the problem. I assumed that my passive concern would be enough."

Internationally, only about one-quarter of newsworthy subjects are female, and some outlets are worse than others. LaFrance also cited the stat that Forbes and the BBC refer to men 81% of the time. So I decided to check my gender equality in 44 months' worth of my pieces. Here's what I found.

I looked through 308 posts at Forbes from May 2015 through February 2019. From that number, I specifically excluded any piece that cited no named individuals, that were about my own research, that were explainers, or that were evergreens, and focused on my summaries and reporting on newly published research in 222 articles that collectively were responsible for 7,981,748 hits.

In the 222 pieces, I mentioned 395 researchers by name. This was always the first author, and sometimes the second or multiple authors. Of these, 218 were male and 177 were female, for a ratio of 55% male to 45% female. A chi-square test is statistically significant at p < 0.05, meaning I quoted men significantly more often than women.

I also tabulated the commenters, or people whose research was not featured but whose expertise I relied on for quotes or other information. There were 174 commenters -- 94 male and 80 female. This gender ratio, 54% male to 46% female, was not statistically significant in a chi-square test.

In an attempt to graph this, I separated the data by month (as I average 5 posts per month) and then calculated the male:female ratio. A ratio above the green line is more male, while a ratio below it is more female. So there are clearly entire months when I covered basically all women's work, and months when it's all men. 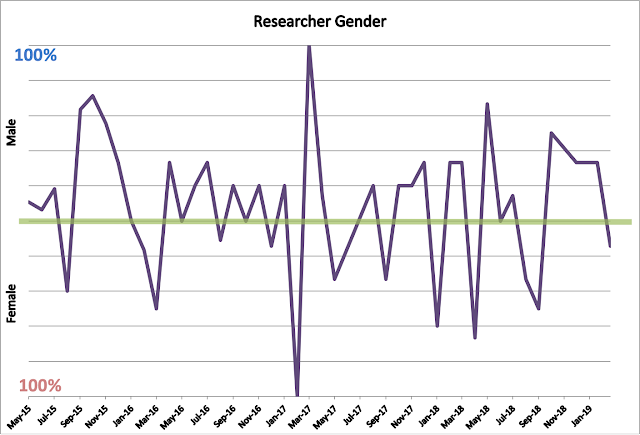 Commenter numbers are harder to deal with, since I largely gave up on finding lots of commenters after the first couple of years writing for Forbes. It took a significant amount of time, and maybe half the people would answer my emails. But in combining the Researcher and Commenter numbers, there are 312 men and 257 women, for a gender ratio of 55% male to 45% female over all the experts I mention in 222 Forbes posts.


There is, of course, a lot going on in these data. There are a few posts in the data that may skew the numbers, such as those in which I summarized or referred to a lot of research. While I excluded historic-only posts, some of the numbers (particularly from men) come from my quoting or referencing older articles/books/etc. Additionally, I do not limit my coverage to bioarchaeology, so the times that I write archaeology or palaeoanthropology news tend to focus on men, as those subfields have more men.

Since I hadn't set out initially to pay attention to gender balance or otherwise track it, I had no real expectations going into this exercise. I guess I figured it would be either 50/50 or like 55F/45M based on my perception of gender in bioarchaeology. My numbers certainly aren't as bad as they could be, but they're also not as balanced as I hoped they were.

Going forward, I aim to be less passive and more active about balancing the people I quote. One way is by starting a Google Doc that any anthropology (or similar) expert can add their name to -- Anthropology Expert Media List. I'm hoping that helps me raise my numbers of commenters and further diversifies the voices in these pieces.

If you have other ideas for how I can investigate the variation in these data, let me know! I'm happy to share the simple database I created.