As an anthropologist, I can't move on.

My first time teaching anthropology was in 2002. Recently MA'ed, I took on a summer course teaching general anthropology at a local community college. My students were diverse in race, age, life stage, and socioeconomic background, and I was excited.

I taught the course typically -- four fields (bio, archaeo, cultural, and linguistics) -- with associated readings and an ethnography outside of the textbook. I chose Nisa: The Life and Words of a !Kung Woman by Marjorie Shostak. A classic, the work chronicles years in the life of a female member of a southern African hunter-gatherer tribe. It was a safe choice, I thought, and fit in well with the themes of the course. But during the class discussion, a 20-something white male, a guy who always had opinions about everything, offered simply: "Nisa is a whore. She has multiple partners. Leaves one guy for another. She's nothing but a dirty whore."

As a newly-minted PhD in early 2011, I taught general anthropology, this time at a large public university. Instead of a traditional ethnography, I assigned The Immortal Life of Henrietta Lacks. This was before other universities were assigning it as summer reading, in the days when it felt a bit subversive to choose it for class. Since many of my students were planning careers in the medical and allied health fields, I thought that book would be eye-opening: a commingling of culture, (lack of) privilege, race, class, and scientific advances.

And then in the discussion, the same thing happened. White male vitriol about how Lacks was a slut, how she should have rebuffed the "advances" of the family member who sexually assaulted her, how her family was trying to profit from her death. Again, I asked the students to think critically and empathically, to look at the larger structure (and structural violence) in which we were reading the book. But again, I moved on because I didn't know what else to do. Because I saw my female students shift uncomfortably in their seats. Because I was a bit scared of the 20-something male college students who clearly were physically larger and stronger than I.

And as a professor here in 2016, I teach biological anthropology to both undergraduate and graduate students who don't "believe" in evolution. Those students do not read as violent as the misogynists and racists, thankfully, but still tend to disrupt class. I tell them that it's not my job to reconcile their faith and science, and that the course requires them to know the correct answers to scientific questions. And I move on.

While I have been thinking about how to write an "anthropologists react to the election" post for Forbes, I haven't yet figured out how. The responses right now are still too disparate for me to see a thread -- that is, the archaeologists are doing one thing (like working to understand and make policy to safeguard sites) and the cultural folk are doing another (preparing to gather for the AAAs, where hopefully there will be some brainstorming). The bio folk haven't officially weighed in, and I don't know if there is a larger response from the linguists. But it's early yet.

Right now, we need not just committees that take weeks to get an official statement out, but a real push towards public outreach, the creation of free webinars on science policymaking and lobbying, and re-training of anthropologists like me so we can better teach all four fields and be activists in educating. Because I feel at least a little complicit in the creation of today's public -- in 14 years of teaching anthropology, I have not done my best to reach my students and have shied away from difficult conversations.

I can't move on anymore.

For other anthropological takes that I've been reading this week, check out: 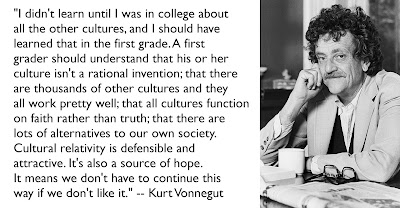