"Can I just drop my death trophies off at your office, Dr. Killgrove?"

I popped into lab late yesterday afternoon, since my new TA Andrea was helping some students study for their first quiz in Human Osteology. Noticed an odd box on one of the lab tables--clearly handmade, not very well, of lightweight, stained wood with five holes poked in the top. I asked Andrea if it was hers, but it wasn't. It wasn't there Wednesday when we had class, and Andrea knew the TA for the Thursday afternoon intro to biological anthropology lab hadn't brought it in either. 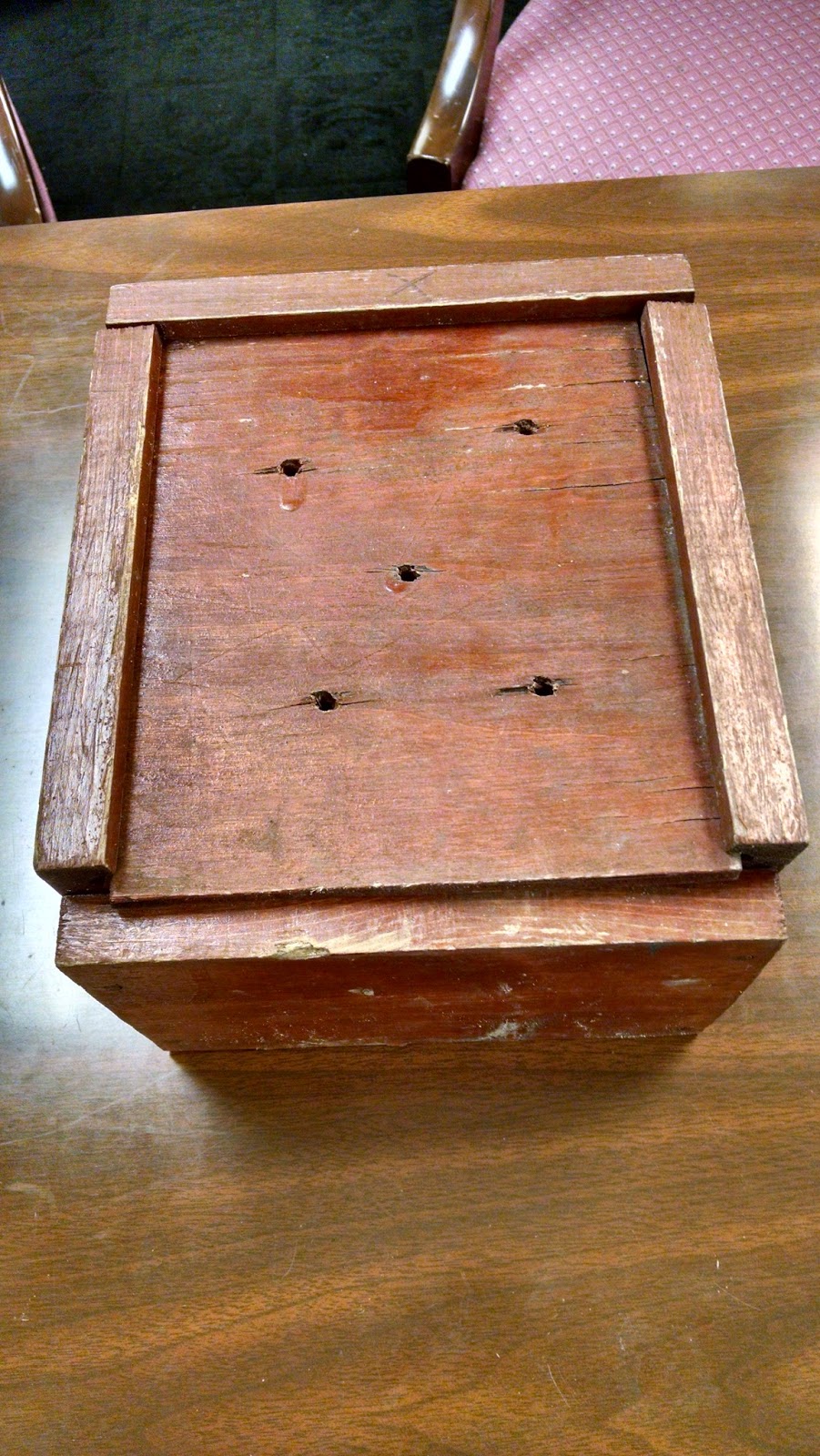 We opened the box cautiously given our uncertainty about its provenience. To be honest, we were preparing ourselves for a toad or a mouse--live or dead, who knows. Fortunately, Andrea is either more curious or less afraid of creepy crawly things than I, and she opened it. 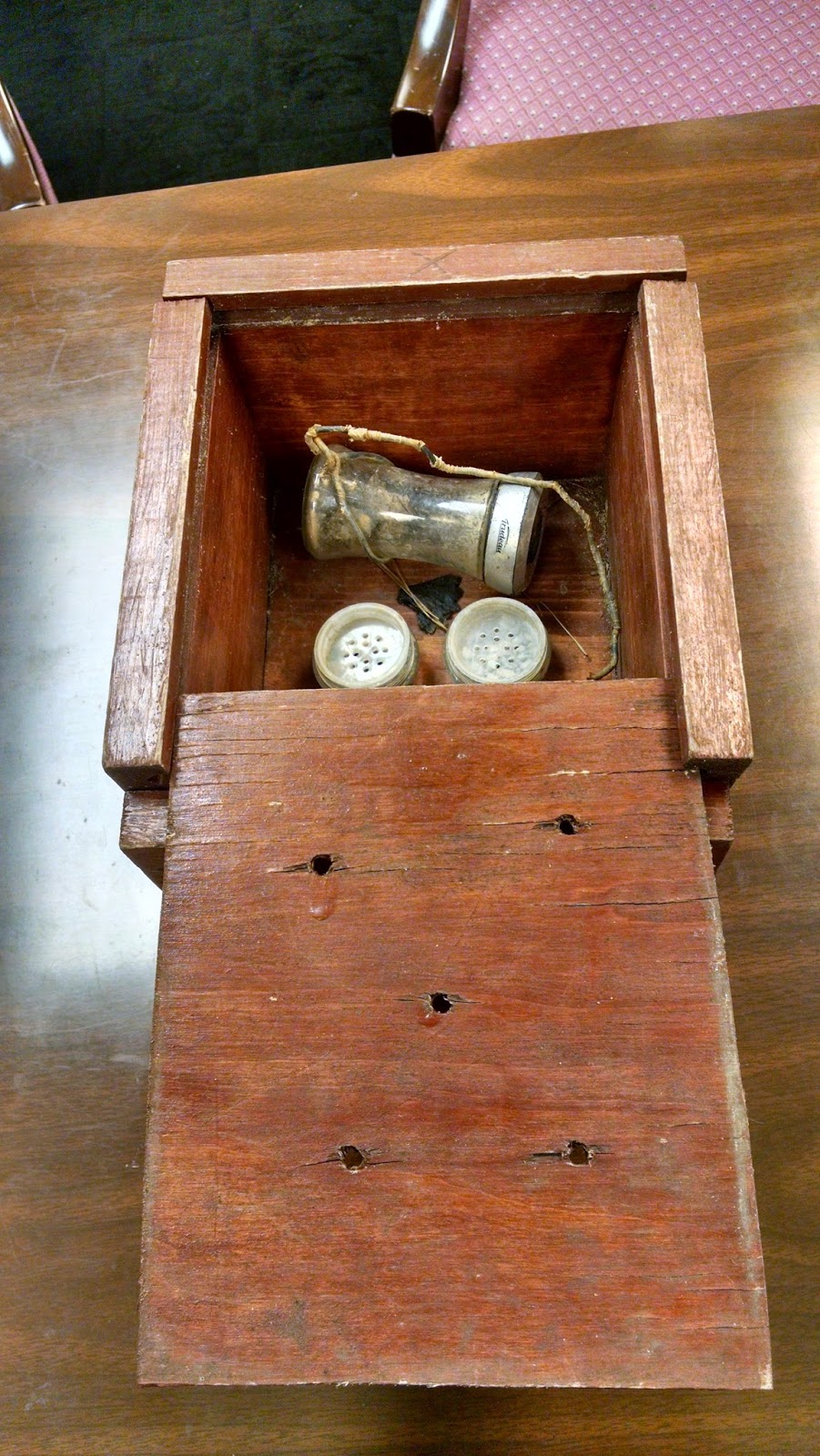 Inside, in addition to a couple of leaves and other detritus of nature, were three things: a small container of human teeth; a small container of what could be bone, shell, or other; and what appears to be an old pepper grinder with a chunk of perhaps charcoal in it, wrapped in a copper wire.  I recognized the smaller containers immediately, as I have one of these containers at home for powder foundation.  They're sold in makeup sections of drugstores.

Andrea and I looked at each other.  I took a deep breath and went to find our forensic anthropologist to see if she knew the story of the box. 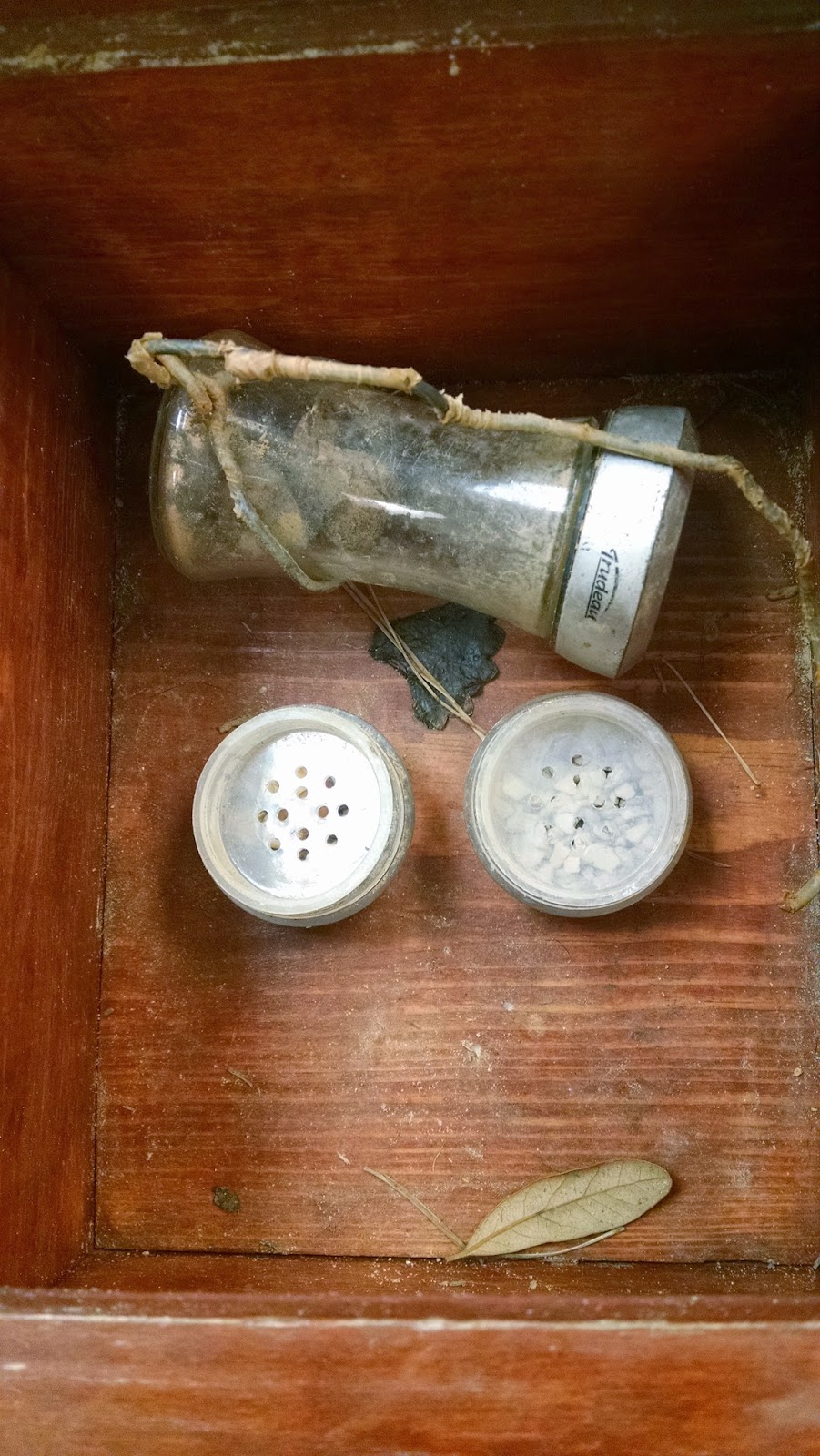 I took the box on a little promenade through the department in the waning hours of the afternoon right before our annual graduate student meet-and-greet, and one of our adjunct instructors, a thickly be-moustached archaeologist, said, "Oh yeah. Last night one of the lab instructors--the black-haired one--came and showed it to me. We concluded there were human teeth."

After uttering a "What the everloving fuck?", I went back to the lab to see what I could find out about the box and its contents.

The teeth appear to be modern, probably extractions from someone (more likely from someones, but I haven't had time to thoroughly look at them) with poor dental health. There's even a little bit of bone attached to a couple. I haven't yet pried the container with the fragments open; after slicing my finger with a dental pick (irony?) during my attempt yesterday afternoon, I gave up and went to the grad student meet-and-greet, as per my duty. 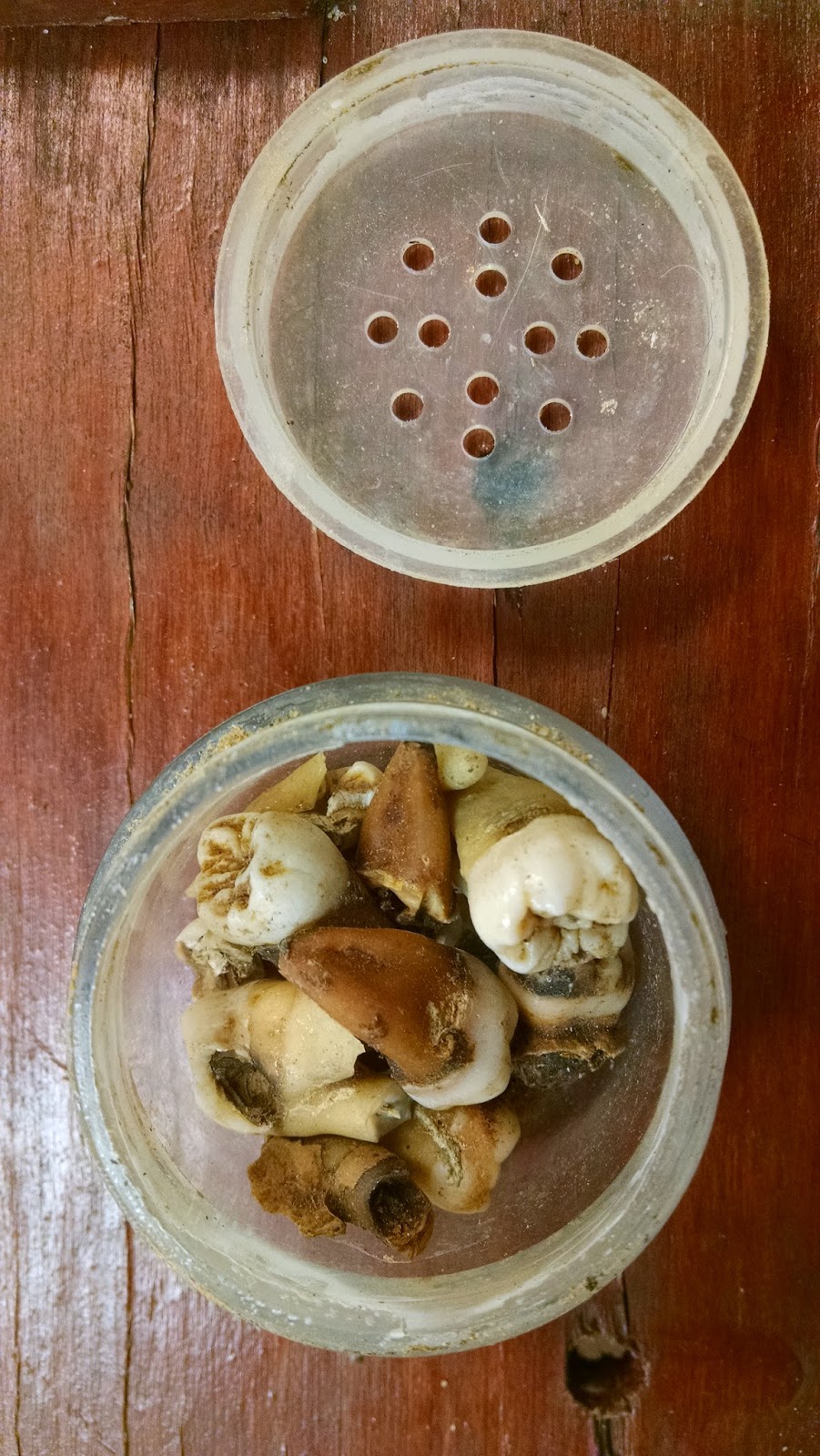 After putting the kids to bed last night, an email pinged into my phone from the TA who had received the box and left it in the lab classroom.  It didn't particularly help with the context.  She told me that a guy--not one of her students--simply came into the department just before her 6pm bio anth lab and was looking for someone to give the box to. He claimed to have found it in the parking lot outside the anthropology building.
We're in a pretty special location here in Building 13, just in front of the head of the campus nature trail.  In the two years I've been here, the nature trail has produced everything from a dead body to rotting shark flesh (two separate incidents!) to curious circles of stones.  And in all those cases, our diligent admin assistants have fielded calls from campus police.

I called back while eating my lunch.  The dispatcher put me on hold for a bit, and instead of hold music, I got an interview with Joan Rivers.  Yup, a dead person's voice in my ear while staring at a box of bits of a possibly dead person.

Two campus police officers showed up a short time later.  Neither introduced himself, but both were intensely curious about my call.  As I explained the story, one stood quietly and the other slowly started grinning. One asked if they were possibly false teeth (nope), and the other was thankful he'd already eaten lunch.  They suggested I keep the box and its contents--"You know, to show the students what happens if they don't do well in your class!"--and left chuckling.

I put the whole story and pictures on Facebook this morning, and one of my colleagues from the second floor just commented that she noticed the box near the stairs a while ago, possibly two months ago.  So a weird box with half a dozen human teeth in it has sat outside, just feet from my office, since the summer.  I guess I can blame @_Florida Man.

On the one hand, I guess I'm glad I get some free teeth--after all, I was just about to have the department buy some more for teaching purposes.  On the other hand--this is intensely creepy.  Just really really weird.  I don't want random remains showing up at my office.  Ever.  Without any provenience, without any explanation, well, I just have to call the police.  So please don't drop your death trophies off at my door.  (But if you recognize this box or its contents, get in touch, I guess.)

After my blog post, a cadaver dog instructor at Western Carolina University got in touch with me by email.  He recognized the form of the box as a homemade "hot box" that instructors use in cadaver dog training.  The holes poked in the box and the shaker containers suddenly made a lot of sense -- the dogs could smell the remains but not get at them.  He sent some emails to contacts down here in Pensacola and very quickly located the box's owner.  As the owner was out on a job, he promised he'd forward my contact information to him to retrieve it.

Today, I got a visit from the cadaver dog handler (in broad daylight, but he turned out to be lovely and not at all creepy).  He and his team had been doing some basic demonstration for the police here in the parking lot next to my building (as just past the lot, it is heavily wooded and swampy).  They got a call that they were needed immediately and must have lost a "hot box" in the shuffle.

I asked him what the items were -- teeth, obviously, in one container.  Another one had cremains.  Even though these are human bones that have gone through an intense, hot fire, dogs can scent on them, he said.  And the most freaky part of the box -- the old salt shaker with a wire wrapped around it?  That, he said, is to help train them on "high" finds -- the wire allows them to hang it in a tree.  "Are there lots of bodies found 'high'?" I asked.  He said that, yes, they're mostly suicides and plenty of people commit suicide by hanging outdoors.  This particular former-salt-shaker contained tree bark onto which a corpse had... uhm, juiced?  I'm sure he used less gooey terminology.  Regardless, it made me glad I hadn't opened that one.  Dogs can scent on all of the things in the box, but he said that trainers prefer teeth above everything else -- dogs scent on blood, bone, and tissue, and teeth have all of those things.

I asked him about his job, and he works with KlaasKids, which helps the police and families search for missing and trafficked children.  He also helps coordinate large field efforts, when there are numerous cadaver dogs searching a wide area.  I didn't probe much into why his efforts focus on kids because, honestly, I have two little ones and the topic is far too depressing and anxiety-inducing.  But it sounds like noble work trying to help people.  I was only too happy to return his creepy box of death trophies--er, his "hot box" to him.

And then at lunchtime, I was visited by the FBI.  Completely unrelated to the box of teeth, but boy, my day has been like an episode of Bones to be sure.

Damien Huffer said…
What the everloving fuck indeed! Like the recent skull donations to Goodwill, better in the hands of someone who cares...
05 September, 2014 16:17

Kristina Killgrove said…
The most interesting suggestion I've gotten so far is that the box is from cadaver dog training. (Not good training, apparently, if the dog didn't find it and it's been in our parking lot for months.)
06 September, 2014 07:17

Unknown said…
Sounds like the beginning of a forensic novel of some sort. Like a Body Farm novel.
06 September, 2014 19:51

Unknown said…
I'm sure you've already considered this, but is there a reason you only contacted the campus police? You said the trail has produced a dead body, these teeth could be evidence of a criminal act. That's an incredibly strange story, whatever the circumstace.
06 September, 2014 20:00

Anonymous said…
Looking at your close-up of the tooth container, some of the teeth appear to be third molars, though I can't gauge how representative the top few teeth are of the rest of the dentition. You said the teeth seemed to be extractions - any chance that some of them could be wisdom teeth removed by a particularly unhygienic dentist who for some reason decided to keep them?
09 September, 2014 00:41

Danielle Henderson said…
If the person suffered from poor dental health, what is the likelihood that they bothered getting their third molars extracted? I'd be seriously freaked out by that... ugh.
14 September, 2014 20:21

Unknown said…
What the everloving fuck indeed! Like the recent skull donations to Goodwill, better in the hands of someone who cares...
eid ul adha mubarak best images